OTTAWA — The federal government is investing $5 million to create a national wildfire research network, two years after the Canadian Forest Service warned that Canada's expertise and research on forest fires was not keeping up with the dramatic shift
Jun 24, 2020 5:07 PM By: Canadian Press 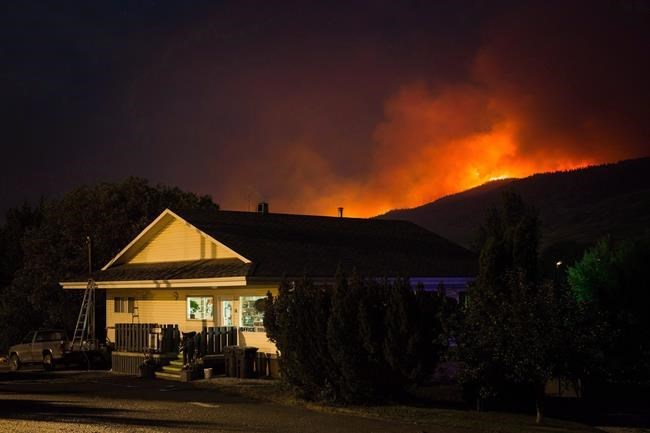 OTTAWA — The federal government is investing $5 million to create a national wildfire research network, two years after the Canadian Forest Service warned that Canada's expertise and research on forest fires was not keeping up with the dramatic shifts associated with climate change.

Natural Resources Minister Seamus O'Regan made the announcement in a virtual news conference Wednesday. He said the warnings from the scientists that fires are getting more frequent and more intense are clear.

"We have to respond with urgency," he said. "The key is better prevention and more preparation. To do that we need to better understand how wildfires are changing, how climate change, insect infestations and disease are making these worse."

The funds come from the $151 million national emergency management strategy to respond to climate change announced in the 2019 federal budget.

The national network, which will train 68 masters', PhD, and post-doctoral students, and possibly another 30 undergraduates, over the next six years, was one of the chief recommendations of the Canadian Forest Service's 2018 Blueprint for Wildfire Science.

That report identified significant gaps in Canadian knowledge of how fires are changing in Canada as summers get hotter and drier, as well as a serious concern that many of Canada's foremost experts on the subject are nearing retirement without enough researchers coming up behind them to fill their shoes.

Many of the tools Canadian fire management policies rely on now are based on research done in other countries, and is not always the best for Canada's forests.

Mike Flannigan, director of the Western Partnership for Wildland Fire Science, has been tapped to lead the project, with 13 others from eight universities. He said Wednesday it is not possible to stop wildfires altogether, but getting a better understanding of how fires burn in this climate will make fire management policies more effective, and help make communities more resilient.

"The demands are changing, the climate is changing, so we need to step up our game," he said.

Warmer weather causes multiple increases to the fire risk, including drier forests and more lightning. Drier forests are also leading to more diseases and pests that kill trees, leaving vast swaths of forest as seas of dead wood that are ripe for the next strike of lightning.

Since 1970, the amount of forested land that burns each year in Canada has more than doubled, and the costs to fight those fires has risen exponentially. Fire experts have predicted it will double again by 2100.

On average each year an area equal to half the size of Nova Scotia burns in Canada, and Canadians spend between $500 million and $1 billion a year fighting on fire management.

Before COVID-19, wildfires were the dominant story of the years as much of Australia burned in the worst fire season that country has had. At least 34 people died, more than 5,000 buildings were destroyed, and an estimated one billion animals were killed in thousands of bushfires covering an area bigger than Yukon.

As hundreds of Canadian firefighters flew to Australia to help, a spotlight was turned on efforts here at home as experts like Flannigan warned Canada is not immune to the same risks behind the Australian fires.

Flannigan said so far in Canada, fires have threatened communities and led to evacuations in B.C., Nova Scotia, Saskatchewan, Manitoba and Quebec. A fire is currently burning out of control north of Lac Saint Jean, Que., is forcing people from their homes and is threatening a hydro dam that provides electricity to more than 85,000 people.

"And this is a quiet year, if you can believe it," said Flannigan.

This report by The Canadian Press was first published June 24, 2020.

CFIA cancels imports of some puppies from Ukraine after dead dogs found on plane
Jul 7, 2020 8:11 PM

Photos surface of Andrew Scheer failing to wear mask while travelling
Jul 7, 2020 8:01 PM
Comments
We welcome your feedback and encourage you to share your thoughts. We ask that you be respectful of others and their points of view, refrain from personal attacks and stay on topic. To learn about our commenting policies and how we moderate, please read our Community Guidelines.