WASHINGTON — Suppose Donald Trump held a summit for the leaders of the world's seven largest economies — and nobody came? That remarkable prospect emerged Wednesday as the U.S.
0
May 20, 2020 4:26 PM By: Canadian Press 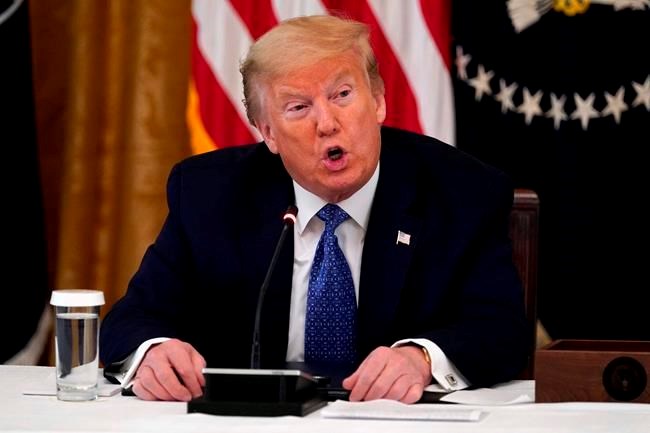 WASHINGTON — Suppose Donald Trump held a summit for the leaders of the world's seven largest economies — and nobody came?

That remarkable prospect emerged Wednesday as the U.S. president mused on Twitter about resurrecting plans to host G7 leaders in person at Camp David next month, in spite of the raging COVID-19 pandemic.

Trump, who rarely misses a chance these days to promote what he bills as the rapid return of American life before the virus, tweeted about holding the meeting on or near the original June 10-12 timeline at the famous presidential retreat an hour's drive north of the U.S. capital.

"Now that our Country is 'Transitioning back to Greatness,' I am considering rescheduling the G7, on the same or similar date, in Washington, D.C., at the legendary Camp David," Trump wrote.

"The other members are also beginning their COMEBACK. It would be a great sign to all — normalization!"

With the U.S. scheduled to play host to the annual G7 this year, the administration's original plan to use the Trump-owned Doral golf resort in Miami was abandoned last fall after critics accused the president of seeking to profit off the meeting. Subsequent plans to convene at Camp David were thwarted by COVID-19, although the leaders did gather last month via videoconference.

Johanna Maska, a political communications consultant and CEO of the communications agency Global Situation Room, was serving as former president Barack Obama's director of press advance the last time world leaders — known at the time as the G8, before the suspension of Russia — gathered at Camp David.

Trump's motives for wanting to reconvene the summit in person may be entirely political, given the U.S. presidential election in November, but Maska said she believes he's deadly serious about it.

"The thing is, by virtue of an in-person engagement, you can convey leadership that you can't, you know, if you record a Zoom. It's a very different dynamic," she said.

Prime Minister Justin Trudeau, asked about the prospect Wednesday, said he supports the idea of G7 leaders spending time with each other, even on a virtual basis. He was noncommittal on the idea of meeting face-to-face.

"We're going to need to keep talking about not just how we get through this COVID-19 pandemic, but how we restore the global economy to its rightful activities," Trudeau said.

"We'll certainly take a look at what the U.S. is proposing as host of the G7 to see what kind of measures will be in place to keep people safe, what kind of recommendations the experts are giving in terms of how that might function."

That's G7-speak for a hard 'No,' suggested Colin Robertson, a former Canadian diplomat who teaches foreign affairs at Carleton University and serves as a vice-president at the Canadian Global Affairs Institute.

"He's not going to be the one to pour water on it, because you want to keep the relationship in reasonable form, but when push comes to shove, I just don't see any of the other leaders agreeing to it," Robertson said.

Brett Bruen, a former Obama-era diplomat who is president and founder of the Global Situation Room agency, was blunt when asked if he thought an in-person meeting in June was feasible. "I don't," he said, "nor do I think many other leaders would come."

Summits are carefully orchestrated, high-security affairs that involve not only countless law-enforcement and Secret Service personnel, as well as sprawling political entourages, but also sensitive and important government officials in addition to the leaders themselves, Maska said.

Along with Canada, the U.S., Germany, France and Japan, the G7 also comprises Italy, one of the European countries hardest hit by COVID-19, as well as the United Kingdom, where Prime Minister Boris Johnson spent more than two weeks fending off the virus, including several days in intensive care. Tempting fate, she said, may not be high on their priority list.

"When your group of people are the people who lead the leading economies of the world, that's very dangerous."

This report by The Canadian Press was first published May 20, 2020.

Press pass offering little defence for journalists caught in the U.S. fray
Jun 2, 2020 2:43 PM
The latest numbers on COVID-19 in Canada
Jun 2, 2020 2:20 PM
Comments
We welcome your feedback and encourage you to share your thoughts. We ask that you be respectful of others and their points of view, refrain from personal attacks and stay on topic. To learn about our commenting policies and how we moderate, please read our Community Guidelines.