OTTAWA — A firearm-rights group is heading to Federal Court to challenge the constitutionality — and basic logic — of the Liberal government's recent ban of many assault-style guns.
May 27, 2020 5:06 PM By: Canadian Press 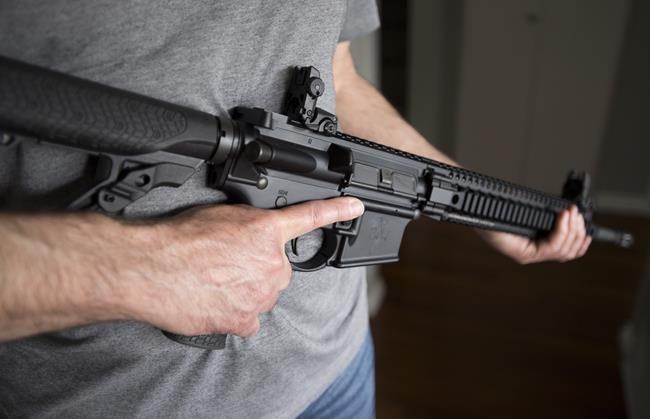 OTTAWA — A firearm-rights group is heading to Federal Court to challenge the constitutionality — and basic logic — of the Liberal government's recent ban of many assault-style guns.

The Canadian Coalition for Firearm Rights says the rifles are obviously suitable for hunting and sporting purposes since shooters have been using them this way for decades.

The coalition is asking the court to strike down new regulations as unlawful and beyond the scope of the powers delegated to the federal cabinet.

The Liberals outlawed a wide range of firearms by cabinet order early this month, saying the guns were designed for the battlefield, not hunting or sport shooting.

The ban covers some 1,500 models and variants of what the government considers assault-style weapons, meaning they can no longer be legally used, sold or imported.

The move was generally applauded by gun-control advocates as a first step toward removing guns used in mass shootings from circulation.

In its application to the court, the coalition says there is "no persuasive evidence" that reclassification of the guns as prohibited firearms will achieve the desired purpose of decreasing mass shootings or otherwise increasing public safety.

Rather, the ban is most likely to spur an increase in illegal importing that will lead to more unregistered and untraceable firearms, the application says.

"Every firearm used for hunting and sporting may be abused, as is the case with endless other items possessed by Canadians such as knives and motor vehicles.

"The detrimental impacts to the liberty rights of legal gun owners are grossly disproportionate to any negligible gains to the public."

Owned and used legally, the firearms in question are a source of livelihood, identity and expression for sport shooters and a source of sustenance for hunters, the application says.

"It was enacted without notice and without legislative transparency. It was passed in this extraordinary way, despite the lack of any real emergency that would warrant such immediate executive action."

The coalition wants the court to grant an injunction staying the effect of the ban until the matter can be fully heard in court.

The federal government will have an opportunity to reply to the arguments in writing and likely during oral hearings.

The coalition's court action comes as the government promises additional steps to control guns. This includes stricter storage provisions and additional resources and stronger penalties for police and border services officers to help stop the flow of illicit weapons over borders.

The Liberals say coming legislation will also empower police, doctors, victims of intimate partner violence and families to be able to raise a flag on those who pose a risk to themselves or an identifiable group.

The legislation is expected to include details of a plan to allow current owners of the newly outlawed guns to receive compensation for turning them in or to keep them through a grandfathering process.

The government faces pressure from gun-control proponents to make the buyback program mandatory to ensure prohibited firearms cannot fall into the wrong hands.

This report by The Canadian Press was first published May 27, 2020.

MPs reviewing virtual voting options to bolster COVID-19 Parliament
Jul 6, 2020 1:05 PM
Comments
We welcome your feedback and encourage you to share your thoughts. We ask that you be respectful of others and their points of view, refrain from personal attacks and stay on topic. To learn about our commenting policies and how we moderate, please read our Community Guidelines.