Marches and demonstrations are taking place around the world on Thursday to mark International Women’s Day.
0
Mar 8, 2018 8:24 AM By: Canadian Press 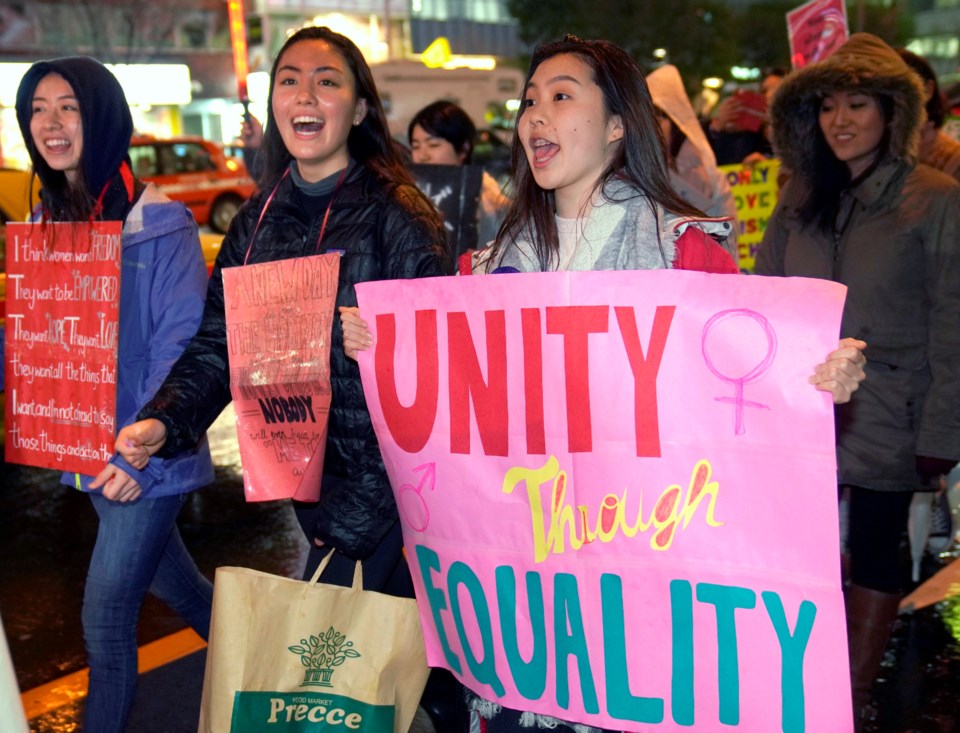 Female participants shout slogans as they march to raise gender equality on a street in Tokyo on the International Women's Day on March 8, 2018. THE ASSOCIATED PRESS/Shizuo Kambayashi

Marches and demonstrations are taking place around the world on Thursday to mark International Women’s Day.

A number of events are planned, including an event in Toronto that will honour Prime Minister Justin Trudeau for his work in promoting gender equality.

Trudeau will receive the 2018 Catalyst for Change Award and deliver remarks at the equal voice International Women’s Day luncheon.

International Women’s Day around the world

Across the globe, the day is being marked with rallies for gender equality and ending violence against women.

Hundreds of women activists in pink and purple shirts protested Thursday in the Philippines against President Rodrigo Duterte, who they said is among the worst violators of women’s rights in Asia.

Hundreds of women held street plays and marched in India to highlight domestic violence, sexual attacks and discrimination in jobs and wages on International Women’s Day.

They carried placards reading, “Unite against violence against Women,” “Man enough to say no to domestic abuse,” and “My body, My choice.”

Violent crime against women has been on the rise in India despite tough laws enacted by the government.

Office workers, school teachers and sex workers were among those participating in the two-kilometre march, which ended near Parliament.

Prime Minister Narendra Modi tweeted: “India is moving from women development to women-led development. Through their exemplary deeds, several women have left an indelible mark in the history of humankind.”

During Taliban rule many would have been afraid to leave their homes, but hundreds of women gathered in the Afghan capital Kabul on Thursday to commemorate International Women’s Day — and to remind their leaders that plenty of work remains to be done to give Afghan woman a voice, ensure their education and protect them from increasing violence.

The head of the Independent Human Rights Commission, Sima Samar, directed some comments at women in Afghanistan’s security forces.

“Your safety represents the safety of all Afghan women,” she said, reminding women in uniform to report any abuse by superiors to the rights commission. She said no one has the right to comment on their physical appearance or to speak to them disrespectfully.

Spanish women are marking International Women’s Day with the first-ever full day strike and dozens of protests across the country against the wage gap and gender violence.

Under the slogan “If we stop, the world stops,” women working both in and outside their homes, unpaid caretakers and students are called to join the 24-hour strike by the March 8 Commission, a platform of feminist organizations that also demands equal opportunities for working women

The latest numbers on COVID-19 in Canada
Mar 30, 2020 2:01 PM
Comments
We welcome your feedback and encourage you to share your thoughts on this story. We ask that you be respectful of others and their points of view, refrain from personal attacks and stay on topic. To learn about our commenting policies and how we moderate, please read our Community Guidelines.