Speaking on behalf of everyone, Senator Allan said that the dinner service was a "memorial to their esteem and affection in recognition of the signal devotion of Her Excellency [Lady Aberdeen] to the promotion of all good works in Canada and [her] invariable kindness to the members of the Dominion Parliament."
0
Jun 17, 2019 10:19 AM By: James Powell 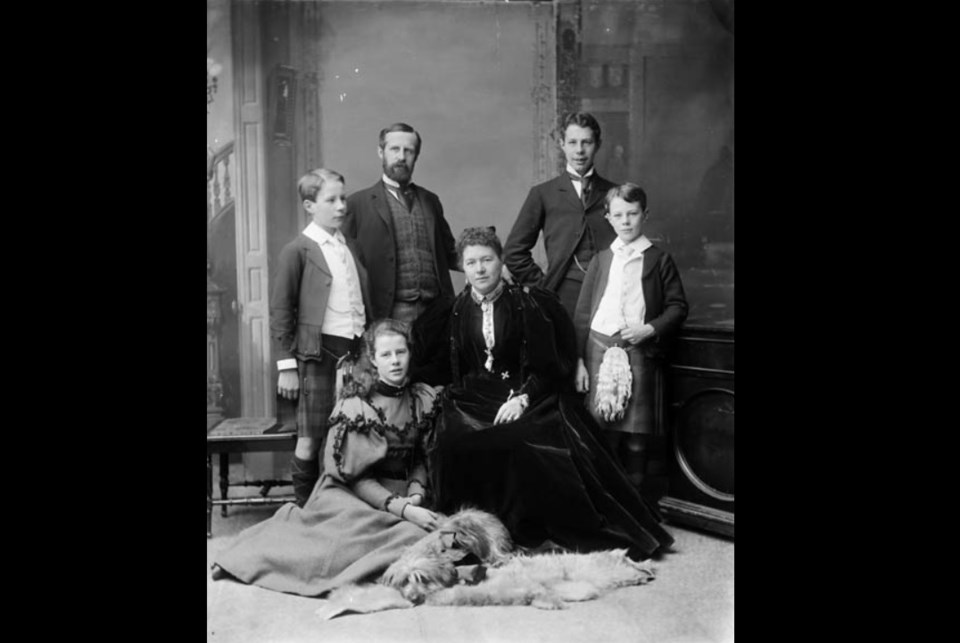 When John Campbell Hamilton-Gordon, the 7th Earl of Aberdeen (later 1st Marquis of Aberdeen and Temair) was appointed Governor General of Canada in May 1893, few Canadians would have known that they were effectively getting two governors general rather than one.

Lord Aberdeen's wife, Ishbel, the Countess of Aberdeen, was not the traditional, self-effacing Victorian wife, content to live in the shadow of her illustrious spouse. While she fulfilled her expected roles of mother and hostess, her real passion in life was improving the lot of the poor, at home in Scotland, or wherever her husband was posted.

Both she and her husband were progressive socially and politically, with links to the Liberal Party. Back in Scotland, she had founded charitable organizations aimed at improving the education and health of working-class women. When her husband was appointed Lord Lieutenant of Ireland during the mid-1880s (and again prior to World War I), it was hard to tell who worked harder.

Immediately upon her arrival in the country, she launched the National Council of Women and was elected its first president, a position she accepted on the proviso she be considered an honorary Canadian. This was not some sinecure. She took the lead in making the council a reality. She had already been elected President of the International Council of Women at the Chicago World Fair, a position she was to hold for more than thirty years.

In 1897, she started the Victorian Order of Nurses in honour of Queen Victoria's Jubilee, criss-crossing the country to drum up support and donations. She and other leading Ottawa ladies also worked hard to establish a public library in Ottawa, though this campaign didn't bear fruit until some years after she and her husband had left Canada.

Charming, persuasive and an excellent orator, Lady Aberdeen's effectiveness was also due to her willingness to use her high social position and contacts to her advantage.

Needless to say, she irritated men who thought the role of the wife of a governor general should be limited to official hostess. Some saw her as bossy, sticking her aristocratic nose into things that weren't her concern. One Halifax newspaper fumed that "we expect our Governors General to so govern their own families as to keep them out of mischief." A New York newspaper said she was "too clever and too advanced for Canadians" and that she was "too much interested in movements."

During Lord Aberdeen's five-year appointment, the couple tirelessly crossed the country meeting and greeting Canadians of all types. They had a particularly strong connection with British Columbia where they had a large ranch. The Aberdeens are credited with launching the Okanagan fruit industry on a commercial scale.

Lord Aberdeen, already extremely popular among Canadians of Scottish and Irish extraction, endeared himself to French Canadians by speaking French, and promoting French culture and heritage. It was he who started the practice of speaking in both official languages at public gatherings in Quebec. He also spoke Gaelic when he visited Nova Scotia (there were so many Gaelic speakers that there was an attempt in the mid-1890s to make Gaelic Canada's third official language).

In 1898, Lord and Lady Aberdeen took leave of Canada.

His last speech in the Senate was on June 13, 1898 when he prorogued Parliament. It was an emotional affair for all concerned.

After the Governor General had concluded his valedictorian speech, people adjourned to the drawing room of the Senate's speaker. There, Lady Aberdeen was given a farewell present, the gift of senators and members of parliament.

The Honourable George William Allan of the Senate and Mr. Frank Frost, the Liberal MP of Leeds North and Grenville North made the formal presentation of a 204-piece formal dinner service.

Speaking on behalf of everyone, Senator Allan said that the dinner service was a "memorial to their esteem and affection in recognition of the signal devotion of Her Excellency [Lady Aberdeen] to the promotion of all good works in Canada and [her] invariable kindness to the members of the Dominion Parliament." He noted that the painted plates were the work of the Women’s Art Association of Canada and was hence "most suitable for presentation, both because it is purely Canadian and because it is the result of efforts of Canadian women, in whom Your Excellency has always shown the deepest interest."

Lady Aberdeen was surprised and genuinely touched by the magnificent gesture. She responded without notes, saying that she was "overwhelmed" by the splendid gift. She added that the parliamentarians "could not possibly have chosen anything that [she and her husband] could have valued more," and that it held "a special value to [her], being handiwork of those Canadian women workers with whom [she had] so many cherished associations of affectionate sympathy and co-operation for common aims and common works." She concluded by saying that during every festive event, the plates would remind them of their stay in Canada.

The dinner service had its origins in an idea championed two years earlier by Mary Ella Dignam, the founder and president of the Women’s Art Association of Canada (WAAC) as a way of celebrating the 400th anniversary of the John Cabot’s journey of discovery to North America in 1497.  Sixteen Canadian women artists were jury-selected to paint images of Canadian places of historic importance as well as examples of Canadian flora and fauna on the 204-piece, ceramic dinner service.[1] Dignam hoped that the Dominion Government would buy the service, which was called the Cabot Commemorative State Service, for use at Government House (Rideau Hall) for state banquets. The selling price was $1,000 (roughly $30,000 in today’s prices).

In an interview that appeared in The Globe newspaper in 1897, Dignam credited a Mr. Howland (most likely Oliver Aiken Howland, an Ontario politician and future mayor of Toronto) as coming up with the idea of commemorating the event with a historical work, and a Mr. Thompson with the suggestion that the work take the form of a state dinner service. However, Dignam was the person who brought the idea to fruition. In addition to honouring Cabot and equipping Rideau Hall with a distinctively Canadian dinner service for state events, Dignam hoped that the work would help establish ceramic art as a "permanent industry" in Canada.

The inspiration for a Canadian state dinner service appears to have come from south of the border.

In 1879, the wife of then U.S. president Rutherford Hayes commissioned a state dinner service for the White House featuring American flora and fauna. The plates were designed by the American artist Theodore R. Davis and were produced by a company in Limoges, France. While this American service may have provided the model for the Canadian dinner service, Dignam was adamant that there was no resemblance between the two services except for their intended use. The American plates were designed by one man and decorated in one factory, whereas the Canadian plates were the designed by many female artists and were made across the country.

After being selected through a competition, the sixteen artists bought commercially-produced, plain white, ceramic "blanks" produced by Doulton China of England for $6.60 a dozen. Dignam promised the artists at least $60 less ten percent for twelve pieces of original ceramic art, on the assumption that the service would be sold for $1,000. The rest of the funds raised would go to cover other expenses such as postage. If the service didn’t sell, the artists were on the hook to find buyers for their creations.

Each place setting consisted of a soup plate, fish plate, dinner plate, game plate, salad plate, cheese plate, dessert plate and a coffee cup and saucer. Each plate and cup had its own unique design. A ceramics committee of the WAAC provided a collection of pictures and sketches of Canadian historic sites, Canadian game animals, fish, shells and ferns for the inspiration of the artists. Artists were assigned plates to design, paint and fire. For example, Mrs Egan of Halifax and Miss Whitney of Montreal were assigned the game plates, with the former painting large game birds and the latter small game birds. On the rim of the game plates were painted the food favoured by the species shown in the centre. On the back of every plate was a special red logo of the shield of the WAAC surmounted by rendering of Cabot’s ship, the Matthew, with the dates 1497-1897 underneath.

The artists had only four months to complete their designs and fire the plates. Working in isolation from each other, the full dinner service was only seen in its entirety when the ceramics committee assembled it for inspection. The Cabot Commemorative State Dinner Service went on public display at the Pantecnetheca (116 Yonge Street) in Toronto in July 1897. It was subsequently displayed during the British Association meeting held in Toronto the following month, and at the headquarters of the WAAC where Sir Wilfrid Laurier, the Prime Minister, and Lady Laurier inspected the pieces. The dinner service then travelled to other cities for public viewing.

While the dinner service was highly praised, Mary Dignam was unable to persuade the Dominion Government to part with the $1,000 needed to cover the costs of production. So, Dignam approached Lady Edgar, the wife of the Speaker of the House of Commons, who put her in touch with a number of senators and members of Parliament. More than 150 senators and MPs put up the required $1,000 in a private subscription to purchase the dinner service to honour the Canadian achievements of Lady Aberdeen.

The dinner service, now called the Canadian Historical Dinner Service, went home with Lord and Lady Aberdeen and took up residence in their home, Haddo House, where it was stored in a specially-built cabinet. The dinner service, which is now owned by the National Trust of Scotland, resides there to this day. In 1997, part of the service was exhibited at the Canadian Museum of Civilization, now known as the Canadian Museum of History, for the 500th anniversary of John Cabot’s journey to North America.

Remember This? Devlin's-Morgan's on Sparks Street
Mar 23, 2020 10:38 AM
Comments
We welcome your feedback and encourage you to share your thoughts on this story. We ask that you be respectful of others and their points of view, refrain from personal attacks and stay on topic. To learn about our commenting policies and how we moderate, please read our Community Guidelines.