In the fall of 1904, the reigning Stanley Cup champions, Ottawa's Silver Seven, the forerunners of the Ottawa Senators, were challenged by an upstart team from Dawson City, Yukon called the Dawson City Nuggets, or sometimes the Dawson City Klondikers.
0
Jan 14, 2019 9:56 AM By: James Powell 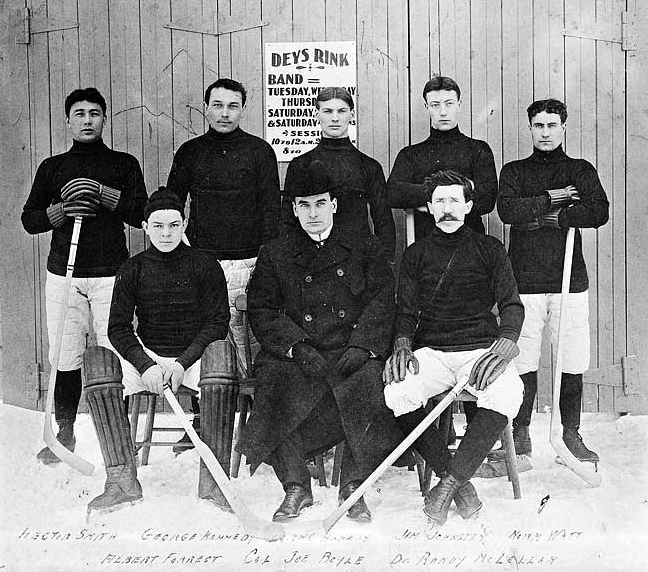 At the beginning of the twentieth century, the rules of ice hockey were considerably different than they are today.

For one thing, a team had seven players on the ice instead of the modern six. The extra player was known as the "rover." The game itself was divided into two thirty-minute halves, instead of three twenty-minute periods. Forward passes were illegal. Similar to rugby, the puck-handler who found his progress blocked was forbidden to pass the puck forward to an open team mate. Pity the poor goalie too.  He was virtually indistinguishable from other players, wearing little or no padding. At best, his shins were protected by cricket pads. The other team members didn't have it easy though; line changes were a thing of the future.

Who could compete for the Stanley Cup was also very different. Instead of the Eastern and Western Conference champions of the National Hockey League playing in a best-of-seven series, the cup was a "challenge cup" for amateur play. A hockey club, usually the winner of some league play, challenged the Cup holder for the trophy, typically in a best of three game series, or a two-game, total goals series. The winning team also got to take home the cup, and only relinquished the trophy upon its defeat by a challenger.

In the fall of 1904, the reigning Stanley Cup champions, Ottawa's Silver Seven, the forerunners of the Ottawa Senators, were challenged by an upstart team from Dawson City, Yukon called the Dawson City Nuggets, or sometimes the Dawson City Klondikers.

The cup challenge was organized by Colonel Joe Boyle, Dawson City's number one citizen. Boyle, a larger-than-life character, had made a fortune in the Klondike Gold Rush of 1898 through mining concessions and other businesses. His nickname was "King of the Klondike."

By 1904, however, Dawson City was in decline, the gold largely played out. Its population, which had topped 40,000 at the peak of the gold rush in 1898, had fallen to less than 5,000, though there were more settlers in the surrounding hinterland.

Boyle, a one-time boxing promoter with a passion for hockey, put together a four-team league consisting of miners, prospectors, police and civil servants. The small league played at a newly-built, indoor rink that amazingly boasted an attached clubhouse, dressing rooms, showers, lounges and a dining room.

The Dawson City Nuggets, an "all-star" team, were drawn from this ragtag bunch. Confident of their abilities, however, somebody came up with the idea, reputedly at a "knees up" in a local saloon, of challenging the Ottawa Hockey Club's Silver Seven for the Stanley Cup.

This wasn't as wacky an idea as it sounds.

A number of good hockey players had come to the Klondike to seek their fortunes. As one press report of the time noted, the men "continued to play hockey when they were not 'plucking gold nuggets.'"

Coincidently, many of the players were from the Ottawa area. The team's captain, Weldy Young, was a legitimate star who had played for the Ottawa Hockey Club during the 1890's. The team's rover, Dr. Randy McLennan, also had considerable hockey experience, having played for Queen's University in Kingston when it challenged the Montreal AAA team in a losing cause for the Stanley Cup in 1895.

However, the Ottawa team was a formidable opponent. It had defeated the Montreal Wanderers for the Stanley Cup in March 1903, and had successfully defended it against five challengers over the following year.

For reasons that are unclear, the Ottawa Club accepted the cheeky challenge from the northerners to a best of three series to be held in January of 1905 in Ottawa.

Col. Boyle bankrolled the Nuggets, covering their travel and other expenses of $6,000, equivalent to about $125,000 in today's money.

With the team's likely share of the box office from the Stanley Cup games expected to be only $2,000, he also organized a series of post-cup exhibition games in eastern Canada and the United States to help re-coup his expenses.

The Dawson City Nuggets became an instant media sensation throughout North America. The Montreal Gazette called their trek out east "the most gigantic trip ever undertaken by a hockey team." Ottawa's Evening Journal said it was "the pluckiest challenge in the history of the Stanley Cup."

Most of the team set out from Dawson City on December 19, 1904. They were originally supposed to leave several days earlier, but their departure was delayed by a federal election in the Yukon. As it was, the team left without Weldy Young. Employed by the government, he had to work over the election period and couldn't get the time off. He later caught up with the rest of the players, too late however to play in the Stanley Cup series in Ottawa. The team's number two player, Lionel Bennett, was also a no-show. He didn't want to leave his wife's bedside after she had been injured in a sleigh accident.

The first leg of their voyage was to Whitehorse, a 330-mile slog through the wilderness, on bicycle, foot, and by sled.

Despite the cold and overcoming frostbite, the men made good time. They covered 46 miles on their first day alone. But it took them nine days to get to Whitehorse, sheltering at night in cabins owned by the North West Mounted Police. From Whitehorse, they caught a train to Skagway, Alaska.

Delayed two days by snow storms in the White Pass, the team missed their boat and had to wait an additional three days before catching a steamer to Seattle.

They then backpacked to Vancouver. At Vancouver, they boarded the transcontinental Canadian Pacific train for Ottawa.

Before leaving, Boyle sent a telegram to the Ottawa Hockey Club asking for the series to be postponed to allow the Nuggets to recover from their odyssey; the request was denied.

The Nuggets arrived in Ottawa on January 11, 1905, two days before their opening game at Dey's Rink, located at Gladstone Street and Bay Street.

The team was warmly greeted in Ottawa. The Ottawa Journal called the Dawson players "hardy Norsemen," and opined that the "Yukon team was a sturdy lot" and would "bear themselves bravely."

The team took some light practice at the arena before the series began, as well as visited the Ottawa Amateur Athletic Club to watch boxing matches and an endurance contest.

The game was played to a capacity crowd of roughly 2,500 spectators. The Governor General, Lord Grey, dropped the puck to start play.

Through the first half, the Nuggets, dressed in black sweaters with gold trim, were competitive, holding the Silver Seven, wearing their red, black and white jerseys, to only three goals to their one. But the Nuggets began to flag in the second half, the effects of their trip becoming apparent. Penalties didn't help either. A punch-up in the first half sent Norman Watt of the Nuggets and Ottawa's Alf Smith off for ten minutes each for fighting.

Tempers deteriorated further during the second half when Art Moore, Ottawa's cover point, tripped Watt and Watt retaliated. After he picked himself off the ice, Watt skated over to Moore and smashed him over his head with his stick, knocking him out cold for ten minutes. Two quick Ottawa goals followed.

The final score was a lopsided 9-2 decision in Ottawa's favour; Alf Smith tallied for four goals, Rat Westwick and Fred White each got two, while Frank McGee scored once. For Dawson City, Randy McLennan and George Kennedy potted a goal each.

Notwithstanding Watt's brutal assault on Moore and the other fights, the Ottawa Evening Journal admired the sportsmanship displayed by both teams. In the newspaper's description of the game, the reporter commented: "It was rather a novelty to the Ottawa public to see such a wholesome, even-tempered exhibition and it went down very well with the audience. More power to you boys!" One wonders what rough games were like during that era.

The second game of the series took place two days later on January 16, 1905.

Both teams made modest changes to their line-ups. For the Nuggets, Dave Fairburn replaced Randy McLennan as rover. Harvey Pulford, the Silver Seven captain took over on point from "Bones" Allan. The national press didn't rate the Nuggets chances very highly. The St. John Daily Sun commented that the Stanley Cup would likely stay east. The newspaper commented that although the Klondikers had demonstrated they could handle the puck during the first game, the team had been "outskated, out-generalled, out-pointed in very department" by the Ottawa club. Still, the Dawson City newspaper, Yukon World, remained optimistic saying that the Klondike team had "a good chance." The paper was wrong.

Ottawa destroyed the Nuggets in the most lop-sided victory in the history of the Stanley Cup, defeating the northerners 23-2 in front of another capacity crowd at Dey's Rink. Reports were pretty unanimous that Ottawa would have run the score up even higher if it hadn't been for the strong goal-tending of young Albert Forrest.

Frank McGee, Ottawa's centre, scored fourteen times, another record that still stands today. Eight of those goals were scored consecutively in less than nine minutes in the second half. McGee, an Ottawa native, was the nephew of D'Arcy McGee, the father of Confederation who was assassinated in 1868. McGee was a well-rounded athlete who had played football for the Ottawa Rough Riders during the 1890s. He had only one eye; he lost the other one in 1900 to a high stick. With a full time job as a public servant, he retired from hockey in 1906 at the tender age of 23 years. Despite his handicap, he enlisted during World War I after cheating on his vision test. He died in 1916 at the Battle of the Somme.

The evening after the Game 2 blowout, the Ottawa Hockey Club hosted a party for the visiting Nuggets at the Ottawa Amateur Athletic Club, with George Murphy, President of the Ottawa Club acting as toastmaster. It must have been quite an event. The Stanley Cup, filled with champagne, was passed around the table repeatedly. Later, somebody drop-kicked the trophy onto the frozen Rideau Canal.

The team from the Klondike left Ottawa for their tour of eastern Canada and the United States.

With the return of Weldy Young to the team, the Nuggets had a modicum of success, though not enough to mitigate their overwhelming defeat in Ottawa. The team then disappeared from history, though not before getting its name engraved on the Stanley Cup for all time.

In 1997 a Dawson City team took on an Ottawa Senators Alumni team in a re-enactment of the 1905 game at the now Canadian Tire Centre in Ottawa. Retracing the steps of their predecessors, the Dawson team travelled by dog sled and snowmobile from Dawson City, to Whitehorse, to Skagway and then by ferry to Seattle, before heading to Vancouver, and finally Ottawa. Before a crowd of 6,000 the visitors were once again thumped, this time 18-0. The proceeds of the charity event, split between the two teams, went to the Ottawa Heart Institute, the Yukon Special Olympics, and Yukon Minor Hockey.