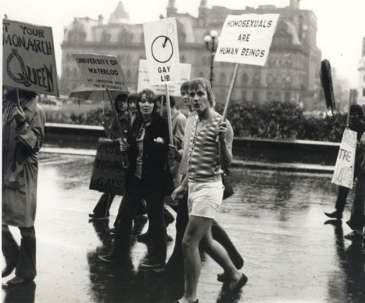 In a CROP poll of Canadians taken in 2017, 74% of respondents were in favour of same-sex marriage, up from 41% twenty years earlier. In its analysis of the results, CROP said, "We are witnessing a social phenomenon… of substance -- a unique, historical process of social change."

Four years earlier, the Washington-based Pew Research Center, found that 80% of Canadians agreed with the statement, "Homosexuality should be accepted by society." This compared with roughly 75% or higher in Western Europe countries and Australia, 60% in the United States, but less than 10% in much of Africa and the Middle East.

Fifty years ago, Canadians were far less tolerant. Up until the late 1960's, sexual relations between men were illegal, punishable by severe penalties.

In 1967, Everett Kippert of the North-West Territories was given an indefinite prison sentence as a "dangerous offender" for simply being a homosexual who was unwilling to remain celibate. His sentence was sustained following a Supreme Court challenge (he was released in July 1971). In 1968, only 42% of Canadians agreed in a Gallup poll that homosexual behaviour between two consenting adults aged 21 or older should not be a criminal act. This was just one percentage point more than the 41% of respondents who considered such behaviour as being criminal.

In December 1967, then-Justice Minister Pierre Trudeau famously said that the "state had no place in the bedrooms of the nation."

Opposition to legalizing male homosexuality was fierce, especially from socially conservative groups, such as the Roman Catholic Church.

Oddly, there had never been a law prohibiting sexual relations between women. There are apocryphal explanations for this omission. One story goes that when introducing legislation against homosexuality in Britain during the nineteenth century, government leaders were unwilling to explain what a lesbian was to Queen Victoria. Consequently, when British laws were introduced into Canada, the same lacuna appeared in Canadian legislation.

While the change in legislation made homosexuality legal, there was a huge panoply of laws, regulations and, of course, public opinion that remained unaffected.

Most people, even those sympathetic to homosexuals, viewed homosexuality as a mental disorder. It wasn't until 1987 that homosexuality was dropped from the Diagnostic Statistical Manuel used by psychologists and psychiatrists to diagnose mental conditions. Homosexuals were not protected by Canada's Bill of Human Rights that had been passed by the Conservative government of John G. Diefenbaker in 1960, or subsequently by the federal Human Rights Act of 1977, or by Canada's Charter of Rights and Freedoms that came into effect in 1982. Nor were there any changes to provincial laws.  Homosexuals continued to be the subjected to discrimination and abuse, or worse.

On August 28, 1971, a wet Saturday afternoon, a small group of men and women numbering anywhere from 80 to 200, accounts vary, marched on Parliament Hill in the first "gay liberation" protest in Canada. They represented a dozen or so mostly university homophile organizations from Guelph University, the University of Western Ontario, the University of Toronto, York University and Waterloo University. Also represented were the Community Homophile Association of Toronto, le Front du Liberation Homosexual of Montreal, the Gay Alliance Towards Equality of Vancouver, the Vancouver Gay Activists Association, the Vancouver Gay Liberation Front, the Gay Sisters, also of Vancouver, and the Toronto Gay Action. Simultaneously, another much smaller group of roughly twenty gay activists demonstrated at Robson Square in Vancouver.

On Parliament Hill, the activists presented a petition to the federal government signed by Brian Waite and Cheri Denovo on behalf of the August 28 Gay Day Committee. In truth, there was few witnesses to the event beyond the press and a lone policeman standing in the pouring rain.

The petition, which was read out loud, was researched and written in large part by Herb Spiers, an American living in Toronto. Spiers was a founding member of Toronto Gay Action and a member of the Body Politic Collective. Reportedly, he had wanted to be in Ottawa to read out part of the petition but a car accident prevented him from making it to the Capital. The petition titled "We Demand" listed ten demands for ending state-sponsored discrimination against homosexuals.

In the petition's introduction, it was noted that although the law had changed regarding homosexuality, it did not put homosexuals on an equal footing as heterosexuals. The law did nothing "to alleviate oppression of homosexuals" and that homosexual men and women were still subject to discrimination, police harassment, exploitation and pressure to conform sexually. Moreover, the petition argued that society’s prejudices against homosexuals were due “in no small way” to the practices of the federal government. The petition set out a way for the government to redress the grievances of the homosexual community.

The first three demands were aimed at putting homosexual and heterosexual acts on an equal footing in Canada's Criminal Code.

This included the removal of nebulous terms, such "gross indecency" and "indecent act," from the Criminal Code and their replacement with a list of clearly defined offences. It also called for penalties for illegal sexual conduct to be equalized for both homosexual and heterosexual acts. In addition, the petition demanded the removal of "gross indecency" and "buggery" as grounds for calling an individual a "dangerous sexual offender," the section of the Criminal Code under which Everett Kippert had been indefinitely incarcerated. It also sought a uniform age of consent, though something lower than the 21 years of age set for homosexual acts which was deemed as being unrealistically high. The age of consent for heterosexual sex was then 14 years of age. It was raised to 16 for both heterosexual and homosexual sex in 2008 with a close-in-age exception.

The fourth demand sought amendments to Canada's Immigration Act to eliminate references to homosexuality or "homosexualism." At that time, homosexuals were prohibited from becoming landed immigrants. Homosexuality was even grounds to deny a person entry into Canada as a tourist.

The fifth demand focused on the practices of the federal government which denied equality of opportunity and promotion to homosexuals, especially into the upper ranks of the civil service. The government claimed that homosexuals were at risk to blackmail, and hence were security risks. Homosexuals were in a classic "Catch-22" position. Even though they might be more willing to reveal their sexuality given changing social mores, they couldn't since their careers would be jeopardized. And since they couldn't reveal their sexuality because their careers would be compromised, they were deemed a security risk.

The sixth demand focused on amendments to Canada's Divorce Act which equated homosexual acts to illegal acts. The writers of the petition favoured no fault divorce as had been recently legislated in England. They also wanted homosexuality not to be a bar to child custody in divorce cases.

The seventh demand was for the right of homosexuals to serve in Canada’s armed forces.  As homosexuality between consenting adults was no longer an illegal act under the Criminal Code, a ban on homosexuals serving in the army, navy or air force under the Queen's Regulations was anomalous and outdated.

The eighth demand was an end to the policy of the RCMP of trying to identify homosexuals anywhere in the government. It also demanded the destruction of all records pertaining to past investigations.

The ninth demand focused on the extension of legal rights to homosexual. At that time, homosexuals could not adopt children, were not eligible for public housing, and could be discriminated in employment, in renting apartments, and in other areas. They were also regularly harassed by police.

Finally, the tenth demand asked for public officials including the police the use their positions to help change society’s negative attitudes towards homosexuals.

These demands were initially ignored. Few paid attention to what most saw as a bunch of social misfits, or worse.

Here in Ottawa, homosexual civil servants continued to work in fear of losing their jobs. It is estimated that between four hundred and eight hundred federal civil servants were fired owing to their sexuality.

Still, the capital had long hosted a thriving gay community. A key meeting spot for decades was the Lord Elgin Hotel, sometimes known as the "Lord Organ" to its denizens. There, gays had their choice of two taverns to hang out and meet people -- Pick's Place in the basement, and the more sophisticated Library on the first floor.

However, during the late 1970's, hotel management, tired of the Lord Elgin being known as a gay hangout, began to discourage gay men from coming. In 1981, Pick's Place closed at 3 p.m., and only opened in the evening for special events. Consequently, its gay patrons decamped to other locales, in particular 166B, Ottawa's first official gay bar, situated around the corner from the Lord Elgin.

But Ottawa gays continued to be harassed. In 1989, Alain Brosseau, a waiter at the Chatêau Laurier Hotel was mugged in Major's Hill Park while walking home at night by thugs who incorrectly assumed he was a homosexual; the park was a known gay pick-up area. Robbed and beaten, Brosseau was thrown to his death from the Alexandra Bridge. His assailant was given a life sentence.

On the legal front, nothing materially changed for Canada's gay citizens until 1978 when homosexuals were finally removed from the group of inadmissible persons under the Immigration Act.

In 1980, nine years after that first "gay liberation" demonstration on Parliament Hill, a bill to prohibit discrimination on the basis of sexual orientation came to a vote in the House of Commons. It failed.

In 1985, the offence of "gross indecency" was finally repealed. Seven years later, Ontario's Court of Appeal ruled that the failure of the Human Rights Act to protect homosexuals was discriminatory. This prompted the federal government to promise to amend the law though it took several years owing to elections and a change in the party in power.

In 1992, the federal government lifted the prohibition of gays serving in the armed forces.

In 1999, the Supreme Court went further, ruling that same-sex partners had the same rights and responsibilities as common law heterosexual couples, including access to social programs. Parliament updated the legislation the following year. Sixty-eight federal laws covering a wide range of subject from pension rights, and income tax to the Criminal Code of Canada were amended. In 2002, the Ontario Superior Court ruled that laws the prohibited same-sex marriages were discriminatory, leading Ontario to become the first province to permit “gay” marriage in 2003. British Columbia followed a few months later.

In 2004, Quebec's Court of Appeal also ruled in favour of same-sex marriages.

In 2005, the federal Bill C-38 was passed, according same-sex couples the right to marry across Canada. This made Canada the third country in the world to sanction gay marriage, after the Netherlands in 2000, and Belgium in 2003.

While much has changed over the past fifty years, gay Canadians still face hardships. Although mostly accepted by friends and family, a recent survey of the LGBTQ community, 75% reported that they had been bullied sometime in the lives.