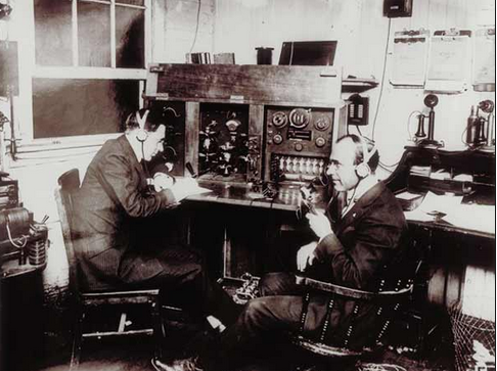 At the turn of the twentieth century, radio was the new, cutting-edge technology. Building on the work of others, including Nikola Tesla, Édouard Branly, and Jagadish Bose, the Italian inventor Guglielmo Marconi established in the early years of the century a wireless telegraph system using a spark-gap transmitter that could send transatlantic radio messages in Morse code. The first such radio transmission, greetings from U.S. President Roosevelt to King Edward VII, was sent in 1903.

Subsequently, ships began to be equipped with radio transmitters and receivers; radio distress signals sent by the RMS Titanic using Marconi equipment are credited with saving hundreds of lives in 1912.

The Canadian inventor Reginald Fessenden demonstrated the feasibility of audio radio using continuous waves by sending a two-way voice message in 1906 between Machrihanish, Scotland and Brant Rock, Massachusetts. On Christmas Eve of that year, he broadcasted a short programme of music by Handel, his own rendition of some Christmas carols, and a reading from the Bible to ships at sea along the eastern seaboard of the United States from his Brant Rock base of operations.

World War I brought further major technological advances, including the invention of the vacuum tube and the transceiver (a unit with both a radio transmitter and receiver), that spurred the development of commercial radio. By 1920, the world stood on the cusp of a new radio age with instantaneous, wireless, audio communication and entertainment.

On May 19, 1920, the Royal Society of Canada convened in Ottawa for its 39th Annual Meeting.

The Society had been founded in 1882 with the patronage of the Governor General, the Marquis of Lorne, to promote scientific research in Canada.

Society fellows gathered at the Victoria Memorial Museum for the opening of the conference, chaired by the Society's president, Dr. R. F. Ruttan of McGill University, and for the election of new fellows. That evening, President Ruttan gave the presidential address in the ballroom of the Château Laurier Hotel. The topic of his speech was "International Co-operation in Science." The general public was cordially welcomed to attend this presentation, and another to be held the following evening at the same venue by Dr. A.S. Eve, also of McGill University.

Dr Eve's lecture commenced at 8:30 p.m. on May 20. Its intriguing title was "Some Great War Inventions."

Among the discoveries he discussed was the detection of submarines. Canadians had been on the forefront of this research, starting with Reginald Fessenden who pioneered underwater communications and echo-ranging to detect icebergs following the Titanic disaster. Subsequently, Canadian physicist Robert Boyle developed ASDIC in 1917, the first practical underwater sound detector machine, or sonar, for the Anti-Submarine Division of the Royal Navy.

At the evening's presentation, Dr. Eve also demonstrated the advances made in the radio-telephone.

At 9:44 p.m., the Society fellows and members of the public heard the words "Hello Ottawa -- Hello Montreal" over a large loudspeaker called a "Magnavox," set up in the Château Laurier's ball room.

The first public wireless conversation in Canada had begun.

For two days, engineers from the Canadian Marconi Company in Montreal and officers of the Naval Radio Station on Wellington Street in Ottawa had laboured to prepare for the event.

The experimental radio station, located on the top floor of the Marconi building on William Street in Montreal, operated under the call letters "XWA" for "Experimental Wireless Apparatus." It had first gone on the air on December 1, 1919 on an experimental basis. Another transmitting and receiver station was established at the Naval Radio Station, with a secondary receiving station set up at the Château Laurier, with an amplifier to ensure all attending Dr. Eve's presentation could hear the broadcast.

At the Montreal end, Mr. J. Cann, chief engineer for the Marconi Company, was in charge, while at the Naval Radio Station in Ottawa was Mr. Arthur Runciman, also from the Marconi Company. Assisting Runciman were engineers, Mr. D. Mason, and Mr. J. Arial. Also present were Mr. E. Hawken, the commanding officer of the Marine Department, and his wife. Stationed at the receiving station in the Château Laurier were Commander C. Edwards, director of the Canadian Radio Service and Lieutenant J. Thompson, his assistant. Journalists covering the historic radio broadcast were based at the Naval Radio Station.

Following the introductory exchange of words, the notes of "Dear Old Pal of Mine," a 1918 hit song, sung by the Irish tenor John McCormick and played on a phonograph in Montreal, could be distinctly heard in Ottawa. This was followed by a one-step ballroom dance tune popular at the time. So well could the orchestra be heard, the Ottawa Journal reporter wrote that some of his colleagues listening to the broadcast at the Naval Station actually started an impromptu dance.

After the dance tune, one of the radio operators in Montreal delivered a speech prepared earlier by Dr. Ruttan on behalf of the Royal Society of Ottawa in which he congratulated the Marconi Company and the Radio-Telegraph Branch of the Department of Naval Service for "their generous co-operation in this difficult scientific experiment." Following a short pause, Society follows were treated to a live performance from Montreal of the early nineteenth century Irish folk ballad "Believe Me If All Those Endearing Young Charms," written by the Irish poet Thomas Moore and sung by vocalist Dorothy Lutton. She sang a second song, "Merrily Shall I Live" as an encore.

It was then Ottawa's turn to communicate to Montreal.

The Ottawa operator first explained the radio experiment to his listeners. This was followed by Mr. E. Hawken singing the first verse of "Annie Laurie," an old Scottish song that begins "Maxwelton's braes are bonnie." Receiving a wild round of applause from his Château Laurier audience, Hawken was persuaded to sing the second verse. Hawken's performance was followed by the transmission of several dance tunes played on a phonograph. The evening's programme concluded with hearty congratulations sent in both directions.

Dr. Eve's demonstration of radio telephony was deemed a huge success. The wireless operators in Ottawa and Montreal were elated. Never before had two-way radio communication had been achieved over such a long distance -- 110 miles (177 kilometres).

The broadcast, at least at the Ottawa end, and especially at the Château Laurier where the signal was boosted by an amplifier, was generally clear and distinct. However, listeners at the Marconi station in Montreal had a more difficult time picking up the signal from Ottawa. Marconi officials explained that reception was adversely affected by  interference from Montreal's large buildings. There were apparently some tense minutes as Montreal listeners wearing headphones tried to decipher the sounds coming from the capital.

The broadcast launched Canada into the radio age.

Some radio historians argue that the May 20 radio performance by Marconi's XWA station to the Royal Society's meeting in Ottawa was the first scheduled radio broadcast in Canada, and possibly the world.

XWA became CFCF in November of 1922. Reputedly, the call letters stood for "Canada's First, Canada's Finest." The station's call letters were changed to CIQC in 1991, and to CINW in 1999. The station went off the air in 2010.