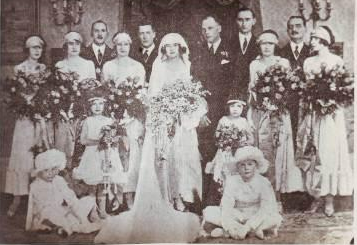 Mrs. Thorkild Jueslberg died at her Danish estate, Bjergygaard, near Copenhagen on February 26, 1941 at the young age of 43. With Denmark occupied by the Nazis, news of her passing went through consular channels to her widowed mother who was living in California, in the neutral United States, before being relayed to the rest of her family in Ottawa.

It was the end of the last chapter of what had been an ill-starred royal romance that rivalled that of Prince Charles and Lady Diana Spencer a half-century later.

In late 1923, it was announced that she would wed Prince Erik of Denmark, the first cousin of both King Christian X of Denmark and King George V of Great Britain.

The couple had met at Lake Louise, Alberta. At the time, Prince Erik was a rancher near the small hamlet of Markerville, Alberta, located roughly 30 kilometres southwest of Red Deer.

On the bright, sunny morning of February 11, 1924, Prince Erik, accompanied by the bride’s brother, went to city hall for a marriage licence. The city clerk, Norman Lett, described the prince as a "nice, pleasant, young man."

The wedding was held that afternoon at 4 p.m., at the All Saints Anglican Church at the corner of Laurier Avenue and Chapel Street. It was the society event of the age. Some 1,000 guests were invited, including all of Ottawa’s elite. Among the attendees were Prime Minister Mackenzie King, and Sir Robert and Lady Borden. The Governor General, Lord Byng of Vimy, and his wife also attended. Many members of Prince Erik’s family were in Ottawa for the wedding, including his father, Prince Valdemar, and brother, Prince Viggo, who acted as one of the four ushers at the nuptials. Prior to the ceremony, Mackenzie King hosted a reception for the visiting Danish royals.

More than 4,000 mostly female spectators jammed the streets around the church to get a glimpse of the bride as she was driven in a limousine the short distance from her family home at 285 Charlotte Street to the church. So great was the crush that spectators who had climbed onto curb-side snow banks to get a better vantage point were pushed into the road, blocking traffic.

At the church, guests had difficulty negotiating the crowds to get inside. Mackenzie King, who walked to the church from his home across the street, was lucky. He had arrived early, avoiding the worst of the crush. Other dignitaries fared less well. The Governor General and his wife only managed to get inside with the help of a police escort who had to physically push back the throngs to make way for the vice-regal vehicle.

Notwithstanding the cold, the temperature of the crowd reached a fevered pitch with the arrival of the bride.

An awning over the entrance way of the church was pushed off its moorings and began to sway dangerously. Appeals from the bride’s father standing on the running board of the limousine, and a phalanx of policemen, were successful in opening up a narrow path up the stairs to the church doors. But the two little page boys who were desperately trying to hold up the white satin train were separated from the bride. It was only with the help of two policemen and a Citizen reporter that the pages were able to gather up the bride’s train and avoid it from being ripped.

On entering the church, the bridal party made their way through six evergreen arches, draped with clusters of southern smilax. White lilies, hyacinths, and freesia perfumed the air. Palm trees and ferns also decorated the church interior. In addition to the bride and groom, the bridal party consisted of a matron of honour, four bride’s maids, (two of whom were daughters of the Earl of Stratford, nieces of the Governor General), four ushers, two flower girls and two page boys. The service was conducted by Rev. J. C. Roper, the Bishop of Ottawa, assisted by Rev. Hepburn, rector of All Saints Church. Miss Booth’s gown was made of white, duchess satin, embroidered with pearls at the yoke, with long plain sleeves edged with pearls and a satin train. Her veil was held in place with a bandeau of pearls and rhinestones. She wore a corsage of rubies and diamonds presented to her by Prince Valdemar, and a diamond bracelet, a gift of her father. Her bouquet was made of lilies of the valley and maidenhair fern. Her attendants wore pale turquoise blue crepe gowns, edged with fur and embroidered with silver and blue forget-me-nots.

After the short ceremony, the bridal party left for the reception held at the bride’s family home. Their departure from the church was even more fraught with difficulty than their entry owing to the crowd of well-wishers and sightseers which had swollen to about 6,000.

As Their Highnesses Prince and Princess Erik left the church, a cry went up "Here they come" which elicited more pushing and shoving. Two women fainted and had to be carried off on the shoulders of policemen. The tattered awning over the church entrance was reduced to a twisted wreck.

Police locked arms to force back the crowds to allow the newly married couple to get into their car; lilies were torn from the bridal bouquet, while the bride’s veil was disarranged. Fortunately, there were no serious accidents, and everybody remained in good cheer.

At the Booth home, guests were greeted in the drawing room with refreshments served in the dining room. The pièce de résistance was a four-tiered wedding cake decorated with Danish and British flags, and tiny sugar elephants, emblems of Danish chivalry.

Wedding presents were on display in the billiards room; Prime Minister Mackenzie King gave the couple a large sterling picture frame with a photograph of himself. The bride’s father gave the couple a cheque for reputedly $4-million (about $56-million today). There was a rumour that her grandfather had provided half of the dowry but this was later denied. The couple also received hundreds of congratulatory telegrams, including ones from King George V and Queen Mary, and Queen Alexandra, the Queen Mother.

After the reception, the royal couple took a train to Montreal before leaving for New York. They later sailed for London, and then onto the French Rivera, before going to Copenhagen to meet the Danish King.

The couple settled in Los Angeles County, California where they started a chicken farm.

There, in 1927, their daughter, Alexandra, was born. Unfortunately, the chicken business failed the following year. The couple subsequently moved to Denmark, where their son, Christian, was born in 1932.

As was the case with Prince Charles and Diana decades later, the marriage did not last.

On November 16, 1934, it was announced that the couple had separated and were seeking permission from the Danish king to divorce. This request was granted and the marriage was dissolved in 1937.

Lois lost her titles as Princess Erik Countess of Rosenborg. Days later, on July 8, 1937, it was announced in Copenhagen that she had married her secretary, Thorkild Jueslberg, six years her junior. Jueslberg was the son of the director of the Copenhagen Post Office.

After a honeymoon abroad, plain Mr and Mrs Thorkild Jueslberg settled down in the former princess’s Danish estate, Bjergygaard, where she died four year later. After the war, her body was interred, as she had requested, in the Beechwood Cemetery in Ottawa alongside that of her father.