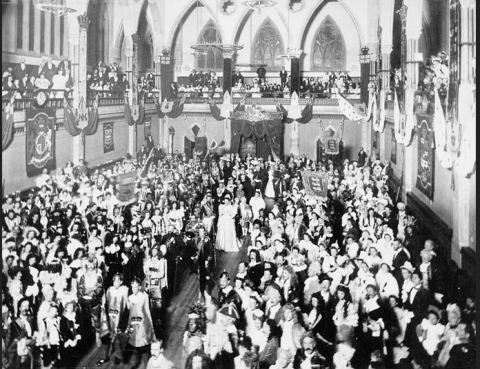 These days, dressing up in fancy costumes is mostly confined to Halloween parties and fantasy conventions such as Comic Con, where super heroes and fairy princesses abound. But back in the latter part of the nineteenth century, costume parties were very fashionable, especially among the upper and middle classes in Britain and North America. Popularized by Queen Victoria and Prince Albert, dress-up balls were quickly adopted by high society.

People delighted in wearing fantastic costumes as long as there was some ostensible historical or literary theme to provide social cover; one couldn’t just have fun. Balls hosted by socialites or aristocrats were widely covered by newspapers and magazines, just as today’s tabloids report on celebrity events. The names of the invited, the costumes they wore, and the evening’s entertainments were often front page news even in the most serious broadsheet.

For the sexually repressed and sober-minded Victorians, being able to dress up provided relief from convention’s restrictions, as well as scope for self-expression.

A lady, whose normal clothing consisted of a floor-length dress with multitudinous petticoats and long sleeves, could provocatively display her ankles, or wear a diaphanous silk gown, as long as she was portraying a peasant girl or some exotic Oriental princess. Instead of a severe chignon, she might wear her hair loose on her shoulders, a style suggestive of the bedroom, without fear of social opprobrium. For a gentleman, the fancy dress ball allowed him to become the peacock. For an evening, a man could put aside his black frock coat in favour of brightly coloured satins, ruffs, and lace, and transform himself into an Elizabethan courtier, a Stuart cavalier, or a Georgian dandy.

While many rented their outfits from professional costumiers, others spent small fortunes having their costumes specially made following extensive historical research. No higher accolade could be received than to be called historically accurate. Even better would be to wear actual period clothing handed down through the generations, or to buckle on an ancestral sword.

In February 1876, Canada’s Governor General, the Earl of Dufferin, and his wife hosted a historical fancy dress ball at Rideau Hall.

Lord Dufferin appeared as James V of Scotland, while Lady Dufferin came as Mary of Guise, James V’s wife. The event, which was widely covered by journalists in North America and Britain, put Ottawa, and for that matter Canada, on the social map of the world. No longer could the city be considered a rough, shanty-town in some distant, frigid land.

The ball was effectively Ottawa’s "coming out" party. The Dufferin ball was the talk of the town for a generation. However, by all accounts, it was eclipsed by an even more spectacular ball hosted by a later governor general and his wife, Lord and Lady Aberdeen.

Lady Aberdeen, born Maria Marjoribanks, was the prime mover behind the event. A considerable personality in her own right, she had strong social views, founding the Victorian Order of Nurses. She was also a proto-feminist, establishing the Canadian branch of the National Council of Women whose mission was to advance women through education and encouragement.  She also loved historical pageants and fancy dress. The Aberdeens hosted three major fancy dress balls during the late 1890s, held respectively in Ottawa, Toronto and Montreal.

The first of the three was held in the Senate Chamber in the old Centre Block on Parliament Hill on Monday, February 17, 1896.

Its theme was outstanding episodes in Canadian history. It was no accident that the contributions of French Canadians were highlighted.

The late nineteenth century was a time of major religious and linguistic divisions in Canada. The decision of the Manitoba government in 1890 to eliminate Catholic public school education, and to make English the sole language of instruction in publicly-funded schools brought these divisions into the open, and threatened the unity of the country. After a number of court decisions, the Judicial Committee of the Privy Council in London, Canada’s highest appellant court, ruled in 1895 that the Dominion government had the power to force the province to fund French-language, Catholic schools. This ruling split the weak, vacillating Conservative government of Sir Mackenzie Bowell, some of whose members were anti-Catholic and anti-French.

The progressive Lord and Lady Aberdeen, who were very conscious of the prevailing religious and linguistic undercurrents, wanted to underscore and honour the richness of French Canadian history, thereby helping to educate English Canadians about the role played by their Francophone co-citizens in the discovery and development of Canada.

Approximately 1,300 invitations to the ball were sent out in early February, but planning for the event started much earlier.

Lady Aberdeen and eight society women (the wives of judges and members of parliament) each took responsibility for enlisting their friends and acquaintances to participate in nine historical groups of twenty or so members. Each group dressed in period costumes, with individuals representing historical figures, such as Jacques Cartier, or supporting characters such as peasants, trappers, and aboriginal peoples.

The theme for each group was chosen with the help of Dr John Bourinot, the clerk of the House of Commons, the author of a number of books on Canadian history.

In chronological order, the groups included: i) the Voyage of the Norsemen to North America, circa 986-1015; ii) the Discovery of the Continent by Jean Cabot,1497; iii) the Discovery of Canada by Jacques Cartier, 1534-36; iv) the Foundation of Port Royal (Annapolis) and the Settlement of Acadia, 1604-1677; v) the Foundation of Montreal and the Settlement of the Surrounding District, 1641-1670; vi) Days of Settlement and Exploration from Tracy to Frontenac, 1665-98; vii) the Days of Montcalm and Wolfe and the Conquest of Canada, 1754-60; viii) from the Fall of Port Royal (Annapolis) to the Second Taking of Louisbourg, including the Expatriation of the Acadians,1710-58;  and, finally, ix) the Coming of the United Empire Loyalists, 1775-92.

The ball was almost cancelled before the formal invitations went out owing to the death in late January of Prince Henry of Battenberg, who was married to Princess Beatrice, Queen Victoria’s youngest daughter. Court protocol called for six weeks of public mourning, meaning no court entertainments.

Notwithstanding this, the Aberdeens went ahead with their plans. As a nod to protocol, the governor general and his wife did not dress up for the ball. Instead, Lady Aberdeen wore formal court dress with ostrich feathers and veil while her husband wore his official Windsor uniform.

Prior to the big day, the historical groups practiced the period dances they were asked to perform, as well as a number of special poses, or attitudes, that illustrated their particular subject.

A dress rehearsal was held two days before the actual ball. Some groups hired dance instructors to help them with their steps as some of the dances were quite intricate. For example, the group portraying Jacques Cartier’s discovery of Canada performed a quadrille, while the participants in the 'Days of Montcalm and Wolfe' danced a faranole. Other dances included a gavotte, a bourrée, and a pavane. For the expatriation of the Acadians, young girls danced around a maypole; there was little reference to the Acadians’ expulsion despite the title of the theme, though perhaps a direct reference to that unpleasantness would not have been well received given the circumstances.

To keep down the personal expenses of guests, Lady Aberdeen invited two costumiers from Montreal to come to Ottawa to help outfit her invitees. People could rent their outfits for the night for $5 to $10 dollars (roughly $100-200 in today’s money). In preparation for the ball, the Senate chamber was closed for two days prior to the big event to permit workmen to lay a temporary pine dance floor at a cost of $25,000, equivalent to at least a half million dollars today -- the tab for which was picked up by the Dominion government.

This exorbitant cost was later the source of criticism, as was the allegation that labourers worked through the Sabbath to complete the floor in time for the ball.

In addition to the dance floor, bunting and decorations were also installed in the Senate chamber. Each pillar was draped with blue silk banners, topped with a crown. On one side of the vice-regal throne the armorial shields of the governors of New France were installed along with the white royal standard of France decorated with golden fleur-de-lis. On the other side were placed the shields of English governors and Union flags. The escutcheons of Great Britain and Canada were also displayed. One of the galleries overlooking the Senate chamber was set aside for the orchestra, while the Parliamentary rotunda was converted into buffet-style dining room.

The ball began at 9 p.m., guests having previously arrived on Parliament Hill on sleighs, their invitations checked at the door by policemen.

Most of the guests were initially confined to the upstairs Senate galleries to watch the performances of the nine historical groups who began their routines after the arrival of the Governor General and Lady Aberdeen, along with the Prime Minister, Cabinet Ministers, and Supreme Court Judges.

After each historical groups had performed its dances, their members were formally presented to the vice regal couple.

The Aberdeens marked their appreciation for the dancers’ efforts by giving each participant a silver brooch or a scarf pin carrying their family motto, Fortuna sequitur.

At about 11 p.m., the roughly 240 participants in the nine historical groups and the vice-regal party left the dance floor to take refreshments in the Parliamentary rotunda. With the floor cleared, the other guests who had been watching from the upstairs galleries were allowed onto the dance floor. Dancing continued until 5 a.m.

Just before the vice-regal party and the nine groups of historical performers left the Senate chamber, the performers who had played parts of First Nations’ people in the earlier historical groups rushed to the centre of the room war-whooping in a stereotypical display of "the Indian." The impromptu group was led by Hayter Reed, the Deputy Superintendent General of Indian Affairs. Hayter, who was dressed in a full-length, Plains feather headdress, was supposed to represent the sixteenth-century, Iroquois leader Donnacona, who travelled to France with Jacques Cartier. Ostensibly speaking in Cree, with his words "interpreted" by another individual representing the Algonquin chief Tessouat, Hayter spoke of the Indians’ love for the "great chief," and passed Aberdeen a peace pipe. It was not evident that anybody minded or was even aware of the cultural insensitivity and historical inaccuracy of the portrayal of Canada’s first inhabitants.

The ball was deemed a great success. Toronto’s Globe newspaper said "the brilliant spectacle was beyond comparison."

The Aberdeens could take comfort watching 'Montcalm' and 'Wolfe' dancing on the same floor. Their efforts at bringing together English and French in harmony was achieved at least for one night -- the nation’s linguistic and religious divisions temporarily forgotten.