Horse-powered rail cars were the first modes of mass public transit in Ottawa.
Aug 17, 2020 10:24 AM By: James Powell 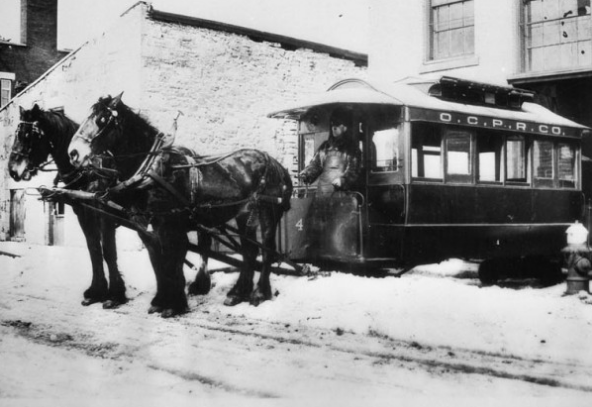 Mass transit began in Ottawa almost a year before Confederation.

As the name of the company suggests, the system was rail based, but unlike trains, it was horse powered. Horse-drawn carriages with wheels that fitted on steel tracks were an efficient, low-cost means of moving people in the days before electricity, or the invention of the car. They could pull a bigger load than non-railed vehicles, such as omnibuses, and provided a smoother ride owing to less rolling resistance, i.e., friction.

Friction was something roads in the 19th century had lots of. In those days before asphalt, Ottawa’s byways and highways were dusty and rutted in summer. In winter, when they weren’t dangerously slippery, they were snow-bound, and rutted. In spring and fall, they were quagmires, thick with glutinous mud. Crossing a street, let alone walking any distance, was fraught with perils to both body and clothing. But a railed, horse-drawn carriage was largely immune to these risks. The horses didn’t seem to mind the uneven or muddy terrain. Their hooves unerringly found sold ground, pulling their passengers in relative, though Spartan, comfort along the smooth rails.

Mind you, it was hardly rapid transit, but this was a slower, more measured age.

With all those politicians and civil servants having to get to work, it wouldn’t do for their daily commute to become bogged down in mud; a convenient, mass transit system was important for civic mobility as well as civic pride.

But while Ottawa had great prospects, it was still a small town. At a stretch, it might have had 20,000 inhabitants at the time of Confederation. Montreal had a horse-drawn rail system, but its population was at least five times bigger. Even so, the Montreal service wasn’t profitable. Consequently, to have a similar service in Ottawa, the government was willing to offer major concessions.

The charter it awarded to the OCPR was in perpetuity -- a unique feature.

As well, unlike in Montreal, the OCPR was neither required to maintain the roads on which the railway ran, nor to build anything but the main line, though the company could build branch lines if it desired. Furthermore, the OCPR did not have to provide a minimum number of hours of service per day, and its rates were unregulated.

In 1867, The Ottawa Citizen commented that even if the company’s immediate prospects were limited, the charter would likely to prove very valuable in the long run. It noted that similar railways in American cities were "the most profitable of all investments," and that "their value is yearly increasing, they are subject to no fluctuations, can have no competition, no risks of fire, and must endure as long as the population." The newspaper also noted that the Ottawa service would run from one burgeoning suburb through the heart of the city to another flourishing suburb, unlike passenger railways in other cities which ran from city centres to sparsely populated outskirts.

Under the company’s charter, the OCPR could begin operations once $30,000 of its capital had been subscribed by shareholders and twenty per cent paid up.

But despite the Citizen’s endorsement, it was a hard task to persuade people to invest in the venture. It didn’t help that the company’s first president was G.B. Lyon-Fellowes, a dodgy lawyer who had been jailed for vote-stuffing after winning a seat in the Province of Canada’s legislature in 1857. He would later briefly become mayor of Ottawa in 1876 in another tainted election but died in office before an investigation into election fraud was completed.

Matters improved once Thomas C. Keefer, one of Canada’s foremost engineers, became a director of the company in 1867 and later its president. In early 1868, Thomas Reynolds, managing director of the St. Lawrence and Ottawa Railway, provided the needed additional funds to get the OCPR 'on track.' The government also waived its requirement that the Ottawa portion of the railway be completed by August 15, 1868, giving the company an additional year.

The line started on what was then known as Ottawa Street (now Sussex Drive) in the Village of New Edinburgh, roughly at the corner of John Street. Leaving the Village, it made its way down the length of Sussex Drive to Rideau Street. Turning onto Sappers’ Bridge, the railway went down Sparks Street to Bank Street. It then headed north for a block, turning left onto Wellington Street, to Duke Street in LeBreton Flats and, finally, to the Union Suspension Bridge, the location of the Chaudière Bridge today.

When it commenced operations, the company had six carriages, drawn by a stable of 36 horses. In winter, the horses pulled sleighs. The rail service proved to be instant success, carrying 273,000 people during its first year of operation.

Although Ottawa residents welcomed the new transit system, there were problems.

Merchants complained about the loss of street parking along the line, and the extent the railway would be double tracked. Others worried about the impact of the line on property values, and the safety of pedestrians. The latter was a real worry; the railway’s first fatality occurred in 1871 when an eight-year-old boy was hit near New Edinburgh. City officials, resentful of the special privileges of the company, complained that railway workers were not grading the streets properly after laying the railway, and that the OCPR was using a different gauge from that used by other passenger railways which meant that vehicles couldn’t run inside its tracks. It later squabbled over the maintenance and cleaning of roads.

In August 1889, the railway added a Rockcliffe extension to its route to increase ridership on the New Edinburgh to Centre Town route.

The extension, which cost $4,500, linked the railway to an existing ferry service to Pointe-Gatineau in Quebec, thereby providing a convenient method of transportation into Ottawa for people living along the Gatineau River.

The new route also gave Ottawa’s citizens easy access to Rockcliffe Park. At the time, this was a remote area which many city residents had never visited. It quickly became a favourite picnicking area; more than 200 people visited on the second day the extension was open and "were charmed with the locality," said the Ottawa Free Press.  The service ran from May through to December.

There was one hitch that marred early jaunts to the Park, however.

The sometimes fraught relationship between the OCPR and the City of Ottawa had led to a 400 foot gap in the line between the end of the main line and the new extension that started close to Rideau Hall, the residence of the Governor General. Unbeknownst to railway officials when they started construction on the extension, the City of Ottawa owned a small stretch of roadway which the company wanted to use. Unwilling to pay what President Keefer thought to be excessive fees for the use of the road, a gap was left in the line.  Passengers heading for Rockcliffe Park were met at John Street by a wheeled carriage which took them to the start of the extension at no extra charge. The 'missing link' was not closed until May 1891.

Notwithstanding The Citizen’s contention that the horse-drawn railway would endure as long as Ottawa had a population, the OCPR didn’t last long.