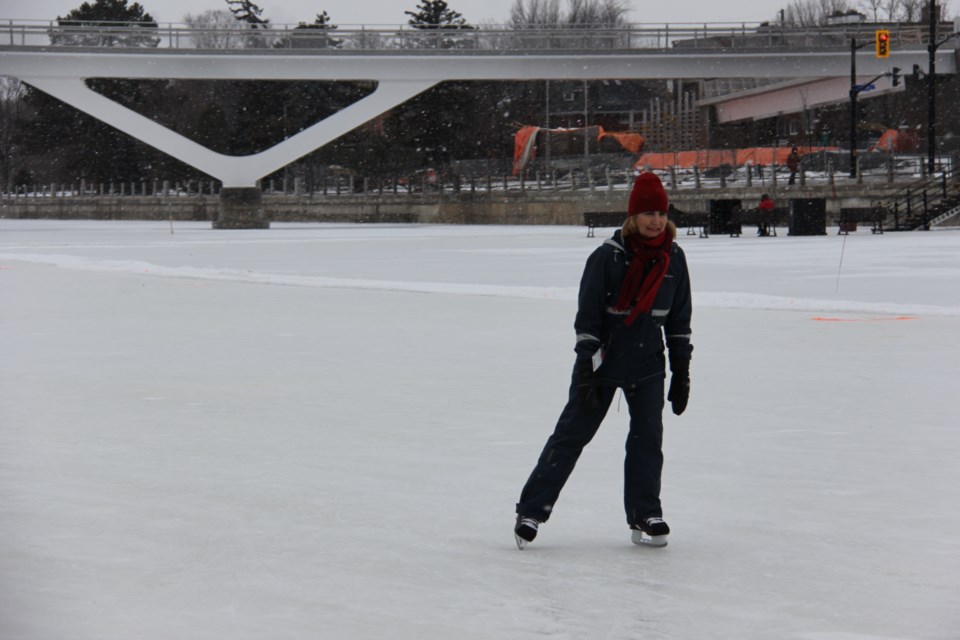 A skater makes their way down the Rideau Canal on December 30, 2018. Alex Robinson/ Ottawamatters

While Ottawa is a great place to live, even its most partisan citizens would have to agree that at life’s great banquet, it got a double helping of winter. On average, Ottawa receives roughly two metres of snow each year over a season that lasts from early November to well into April, with temperatures dipping to -30 Celsius. Consequently, to live happily in Ottawa, it’s important to embrace the season.

Fortunately, we have access to lots of winter amenities, including wonderful ski trails and slopes in the Gatineau Hills just a short car ride away. But one of the city’s winter crown jewels is the Rideau Canal Skateway, which runs 7.8 kilometres through the heart of the city from the Ottawa River locks beside Parliament Hill to the Hartwell Locks at Carleton University. Each year, Ottawa citizens eagerly await the start of the winter skating season, checking regularly the National Capital Commission’s (NCC) web site or its information line on the state of the ice. Requiring an ice thickness of at least 30 centimetres, it takes at least a couple of weeks of temperatures persistently below -15 and a lot of hard work by NCC staff to prepare the ice surface before the Skateway can be safely opened to the public.

Typically, the skating season starts in early January and remains open until mid-March, though the Canal might close for short periods owing to temporary thaws. The earliest opening date occurred on December 18, 1971 and 1982. Its latest closing date was March 25, 1972. The average season is about 50 days, of which 42 are skating days. The longest season was 1971-72 with 95 days, while the shortest was 2015-16 with 34 days, of which only 18 were skating days. Even then, the skateway was open for its entire length for ony a few days. In contrast, the canal was open for a record 59 consecutive days during the previous 2014-15 season, attracting an estimated 1.2-million visitors. In general, however, shorter and milder winters associated with climate change is shortening the skating season.

Skating on the Canal has in fact been a feature of the City’s winters since the 19th century.  In March 1874, The Globe newspaper reported that there “was good skating on the Rideau Canal.” The ribbon of ice running through the city beckoned youngsters of all ages when climatic conditions were just right for a smooth, solid ice surface to form—low temperatures for several days with little snow. When that happened, skaters would descend on the Canal to enjoy the ice. On one occasion early in the 20th century, it was reported that people could skate all the way from Lisgar Collegiate to Sunnyside without benefit of snowploughs or sweeping.

At best, however, the city tolerated impromptu skating on the Canal. When times became more litigious, it forbade it owing to the risk of injury, or even death. Although the water is partly drained from the Canal each fall, it is sufficiently deep in places for people, especially children, to drown should they fall through the ice. Despite the risks, skating on the Canal captured the imagination of Ottawa’s citizens who recalled Dutch paintings of skaters on the canals of Holland. If they can do it in the Netherlands, why can’t we do it in frigid Ottawa?

Conditions were perfect for skating during the winter of 1958-59, and attracted thousands onto the ice on the Canal, Dow’s Lake, and even the Ottawa and Rideau Rivers. Owing to public demand, the city’s Parks and Recreation Department asked Ottawa’s Board of Control for $16,000 to maintain a one mile length of canal between Patterson Creek and Bank Street, complete with ramps, changing huts and lighting, for the following winter season. Instead the City coughed up only $2,000, enough for a ramp at Fifth Avenue and a skating lane. It was maintained for just over two weeks from December 15, 1959 to January 2, 1960. Four men and two ploughs mounted on jeeps were unable to keep up with the snow. As well, twenty men using four water pumps were required to keep the ice surface smooth. But as the water was drawn from under the ice, city officials feared that air pockets might form leading to cave-ins. With attendance low, averaging only 30 skaters per day, the experiment was abandoned on January 5, ending Canal skating for more than a decade.

Despite this setback, people kept the faith. In 1969, the National Capital Commission proposed the establishment of an ice rink on the Canal as a way of “finding imaginative and enjoyable uses for unused resources.” But even as late as December 1970, there were naysayers. In an editorial, the Ottawa Citizen opined that the “durable proposal” of Canal skating was “going nowhere.” Instead, it favoured a temporary outdoor rink with artificial refrigeration be installed by the National Arts Centre across from the Canal.

Skating on the Rideau Canal, February 2014

Douglas Fullerton, the redoubtable chairman of the NCC from 1969 to 1973, would have none of it. On 18 January, 1971, he sent teams of men with shovels to clear a five kilometre stretch of ice, twenty feet wide, from the Arts Centre to the Bronson Street Bridge. It was an instant success; 50,000 Ottawa residents flocked to the canal during the rink’s first weekend to enjoy the experience of skating through the heart of the city. There were glitches, however. During the second year of operations, the shelters provided on the ice for skaters sank. They were subsequently placed on gravel pads. Clearing the snow off the ice and maintaining a smooth ice surface suitable for skating also took considerable on-the-job learning. Within three years, however, NCC crews had improved their technique sufficiently to permit virtually the entire width of the Canal to be cleared for its full 7.8 kilometres length through the city. Changing facilities, bathrooms, skate-sharpening facilities as well as first aid centres were established.  Refreshment stands served snacks, hot chocolate, coffee and cider to cold, weary skaters.  To facilitate night time skating, lights were added.

In 1979, the NCC inaugurated the first annual Winterlude, or Bal de Niege winter festival featuring winter-related activities as well as snow and ice sculptures. It too was a great success. Naturally, its events centred on the Canal; so much so that Fullerton became concerned that Winterlude might detract from the skating. His fears were misplaced. Winterlude became a major tourist attraction and has attracted thousands of new visitors to the Skateway each winter. Ottawa is now a major winter tourist destination.

For many years, the Rideau Canal Skateway billed itself as the longest natural ice skating rink in the world. However, during the mid-2000s, Winnipeg’s River Trail usurped the title. Measuring 9.32 kilometres in length in 2009, it easily topped the Canal for length. Ottawa residents sniffed that Winnipeg’s Trail, which narrowed in places to no more than a car width was a poor excuse for a rink. Ottawa MP Paul Dewar called it a “cow path” in a tongue-in-cheek exchange with his Winnipeg colleague in the House of Commons. Today, Ottawa’s Skateway claims to be the “largest” outdoor skating rink in the world, equivalent to 90 Olympic-sized hockey rinks, a boast supported by the Guinness Book of Records.

Remember This? Mowat and MacGillivray -- stock market swindlers
Aug 31, 2020 11:58 AM
Comments
We welcome your feedback and encourage you to share your thoughts. We ask that you be respectful of others and their points of view, refrain from personal attacks and stay on topic. To learn about our commenting policies and how we moderate, please read our Community Guidelines.