The story behind a curious statue which stands on Wellington Street, downtown.
0
Dec 2, 2019 11:01 AM By: James Powell 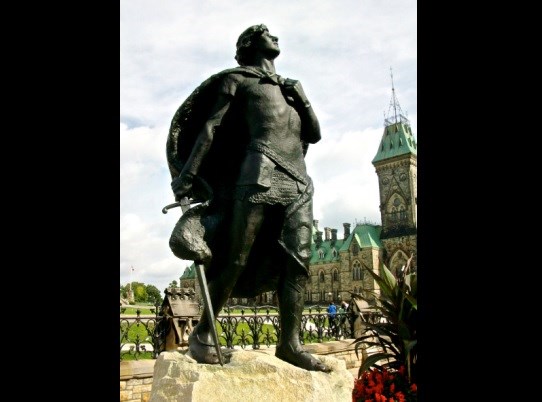 The next time you go for a stroll down Wellington Street, stop and take a look at the statue right in front of Parliament Hill at Metcalfe Street.

Instead of honouring monarchs or prime ministers, it’s a statue of Sir Galahad, the legendary knight of King Arthur’s Round Table, renowned for his gallantry. It was erected in 1905 to commemorate a singular act of heroism that had occurred four years earlier.

That fateful Friday, December 6, 1901, was a bitterly cold day with the temperature in Ottawa struggling to reach -9 Celsius. However, it was bright and sunny, encouraging skaters to test the sheet of seductively smooth but treacherous ice that had formed on the Ottawa River during the first cold snap of the season.

In the early afternoon, a skating party from Government House had ventured out onto the ice without mishap. Later, as dusk fell, another party set out.

The foursome consisted of Miss Bessie Blair, 21, the youngest daughter of the Honourable A.G. Blair; former premier of New Brunswick and then Minister of Railways and Canals in the Liberal Government of Sir Wilfrid Laurier, Alex Creelman, 28; an employee of the Imperial Bank of Canada, Miss Snowball, daughter of Senator Jabez Snowball of New Brunswick, who had been visiting the Blair residence; and Henry Albert Harper, aged 28, the assistant editor of the Labour Gazette, the monthly journal of the newly-established Dominion Department of Labour.

The young people set out from the newly constructed Interprovincial Bridge and headed east towards Kettle Island, with Miss Blair and Creelman skating hand-in-hand in front, and Harper and Miss Snowball pulling up the rear. Unexpectedly, the leading couple came upon an area of open water near the confluence with the Gatineau River, Unable to halt in time, Blair and Creelman plunged into the icy, dark water.

After sending Miss Snowball back to the shore for help, Harper moved to assist the couple who were frantically struggling in the frigid water, weighted down by their heavy winter clothing. Lying prone on the thin ice, Harper extended his walking stick to Bessie Blair but to no avail; she was too far away. Despite entreaties not to venture further, Harper took off his overcoat and gloves and dove into the water to help the sinking woman. Before entering the water, Harper said, "What else can I do?"

Moments later, both he and Blair disappeared from sight. Drowned, their lifeless bodies were recovered the following morning.

Almost miraculously, Blair’s companion, Alex Creelman, survived, saved by Arthur Treadgold, a member of the Government House skating party, whom Miss Snowball had encountered on her desperate race back to shore for help.

Informed of what had happened, he immediately rushed over to the site of the accident in time to pull the unconscious Creelman from the water. Suffering from hypothermia and shock, Creelman was taken to a nearby home to recover, before returning to his rooms at the Turkish Baths Hotel under a doctor’s care. It was Creelman who recounted Harper’s act of sacrifice.

The heroic action of Henry Harper struck a cord among Ottawa’s citizens.

Within days, a large public meeting was held at City Hall where a resolution was passed to commemorate Harper’s heroism by the erection of a memorial statue using funds raised through public subscription. The initiative was strongly supported by William Lyon Mackenzie King, Canada’s future prime minister. He and Harper had been the best of friends at university, and had even shared rooms for a time. King, as Deputy Minister of Labour and editor of the Labour Gazette, had hired Harper in 1900 and was his boss.

The statue was to be symbolic of heroism and nobility of character.

One of Harper’s prized possessions was a reproduction of the 1862 painting of Sir Galahad, by the British symbolist artist George Frederic Watts, R.A. (1817-1904) which had hung behind Harper’s desk in his office. According to friends, Harper saw Sir Galahad as his "ideal knight."

The painting became the model for the statue.

The American sculptor Ernest Wise Keyser from Baltimore, Maryland won an open competition for the commission. His bronze statue set on a granite plinth was unveiled by the Governor General Earl Grey on November 18, 1905, before a crowd of more than 3,000 people as the regimental band of the Governor General’s Foot Guards played "The Maple Leaf" and "God Save the King."

At the unveiling, Sir Wilfrid Laurier told the crowd that "The stranger to our city will pause as he passes this monument and wonder what deed called for its erection. He will be told of the noble act of self-sacrifice of a life given in an effort to save another." P. D. Ross, the chairman of the memorial committee, said that "Harper had lost his life. But in that sacrifice, he left to the rest of us a great lesson and a great inspiration."

The following year, Mackenzie King published a biography of Harper, "his oldest and most intimate friend," titled The Secret of Heroism. In it, King recounts the details of Harper’s short life from his birth and school days, to his life as a reporter, first in London, Ontario and later at the Montreal Herald, and finally to his work at the Labour Gazette. King described Harper as a man of "fearless integrity of heart and mind."

Like King, Harper was a practising Presbyterian, with "a strong belief in a definite moral order and the ultimate triumph of right." King mourned that Canada had lost a "true patriot in sentiment and aspiration," and had Harper had lived he would have been "an earnest and practical reformer." Harper’s political and economic sentiments described in the book are believed to mirror King’s own views, and provided the inspiration that motivated the future prime minister over his long career.

Harper was buried in a hill cemetery overlooking Cookstown, the town of his birth, on what would have been his 28th birthday.