Remember This? The Earl Grey Musical and Dramatic Trophy 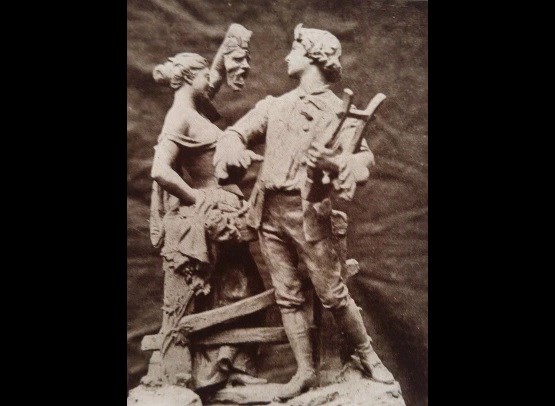 Earl Grey Musical and Dramatic Trophy. The trophy was designed and executed by Louis Philippe Hébert from suggestions of Lord Grey. The woman holding the mask symbolizes drama while the man holding the lyre symbolizes music. The fence between the two figures indicates that music and drama have their own territories. Each figure has a foot on the lowest rail to indicate a willingness to cross onto the other side. See Souvenir Programme, the Earl Grey Musical and Dramatic Competition, Ottawa 1912. Photo/ Historical Society of Ottawa

Each November, thousands of rabid Canadian football fans huddle in the freezing cold, or more typically settle back on their chesterfields, to watch the Grey Cup game that pits the Canadian Football League’s division champions against each other in the quest for bragging rights as Canada’s best football team.

The trophy was first given by Lord Grey, Canada’s Governor General, in 1909 as the top prize in Canadian amateur rugby football. The first Grey Cup champions were the University of Toronto Varsity Blues.

During his term as Governor General from 1904 to 1911, Lord Grey handed out trophies for all sorts of events, including skating, horse racing, and even for the best dog in show at the Ottawa Kennel Club championships.

Not to be outdone, Lady Grey had her own award for best Ottawa garden.

Of all these prizes, the Grey Cup is probably the only one that has survived. However, for a few years, the Grey Trophy, properly known as the Earl Grey Musical and Dramatic Trophy, was likely the best known of all of Lord Grey’s awards, and was highly coveted across the country.

Government House announced the trophy in late 1906 as means of promoting the performing arts in Canada and Newfoundland, then a separate dominion. Very early on, it was decided to offer two trophies, one for the country’s top amateur musical or choral group, and another for the best amateur theatrical company. Entrants were initially limited to provincial capitals, including St. John’s, and cities with a population of more than 50,000.
Multiple city entries were permitted though it was expected that provincial government houses would limit the numbers to about fourteen, enough for two shows per evening during a week-long musical and dramatic extravaganza.

Colonel J. Hanbury-Williams, the Governor General’s secretary, who was also a friend of Rudyard Kipling, took charge of the event, with the help of at least eight committees that dealt with such things as transportation, finance, entertainment, and the press. There was also a special committee for women. Provincial chairmen were also appointed.

The competition was open to amateurs, defined as persons who had not "lived by the profession" within the previous five years. However, the rule was not intended to exclude those that had been paid a nominal amount for performing in a choir or with a dramatic organization.

The performances of each company would be limited to ninety minutes, and no company could have more than 50 members.

To ensure impartiality, the judges for the competition were American. George Chadwick, the director of the New England Conservatory in Boston judged the musical entries. Kate Douglas Wiggin, the author of Rebecca of Sunnybrook Farm, and Langdon Mitchell, a Broadway playwright, judged the dramatic productions.

Competitors had to pay their own way to Ottawa but the transportation committee organized discount fares on the railways. Group rates were also provided by area hotels, though the main venue hotel was the Victoria Hotel in Alymer which was completely booked for the event.

In downtown Ottawa, a Reception Committee organized a city "rendezvous" spot at the Racket Club at 153 Metcalfe Street where a dancing hall was converted into a large, temporary drawing room complete with settees, comfortable arm chairs, and other amenities. There, performers, who were made honorary members for the competition, could relax, write letters, use the telephone, or read newspapers. It was staffed throughout the week with volunteers. Social events were organized for contestants, including a skating and toboggan party at Rideau Hall hosted by Lord and Lady Grey. There was also a tea at the Wright’s Greenhouse, a seven-acre, glass-covered conservatory, in Aylmer.

Two shows were held each evening through the week at the Russell Theatre -- one musical and one dramatic -- with ticket prices of up to $1.

Ottawa led off the competition on the first evening with the D.F.P. Minstrels in the musical event. Shockingly racist, the minstrel show, in which its performers wore black face, was warmly received by the Ottawa audience. The finale of the show was "a medley of plantation songs and Southern war ballads." Later that same evening, the Ottawa Dramatic Company put on Gringoire, a short comedy by Théodore de Banville about a poet forced to play in front of Louis XI of France. The play was performed in English despite it being written in French and all the actors, francophone.

The finale of the event was held on Saturday, February 2, in front of the largest and "most fashionable" audience.

After the last two performances of the week, the judges announced the winners of the competition. The winner for best dramatic performance was Winnipeg’s The Release of Allan Danvers. The play had been expressly written for the Earl Grey competition by three amateur Winnipeg authors, Messrs. Beaufort, Devine and Blue, two of whom acted in the show while the third was the stage manager. According to the Ottawa Citizen, it was the first time a Canadian-written play had debuted in Canada. It was a three-act play with a very heavy plot line. Danvers, afflicted with locomotor ataxia, a muscle disorder, falls in love. Although his love is reciprocated, Danvers refrains from declaring his affections to his lady love since he is dying. Before running off to England to hide from her, his lady indicates her affection for him, but Danvers falls dead at her feet -- hence, his "release."

Based on criteria which included stage setting and the company acting as a unit, individual excellence in grace, diction, make-up and dress, and the power to impersonate and express a range of emotions, the Winnipeg Dramatic Club was selected as the competition winner with a total of 49 out of 50 marks. The Ottawa Dramatic Company managed 41 points for its Gringoire.

Overall, the two drama judges were impressed by the high quality of all the theatrical performances. They added that amateur theatre was typically "a crucifixion of the soul," but that wasn’t the case over the week-long competition. They opined that Lord Grey’s competition should have a positive impact on both the amateur and professional stage. They hoped that it would help address the lack of a standard spoken English which was a deficiency of North America.

The Quebec Symphony Orchestra, founded in 1904 and led by its conductor, Joseph Vezina won the musical trophy. It had presented a classical programme but one of its best numbers, Valse de Concert, was written by Vezina himself. According to the Citizen, it was hard to believe that the orchestra consisted of amateurs, so good was the playing. Spontaneous applause broke out on several occasions during their performance. In scoring the competition, the judge gave the Quebec orchestra 27 out of a possible 40 points in four categories -- attack, precision, and accuracy; intonation (singing/playing in tune); technical proficiency; and expression and interpretation. Ottawa’s minstrels received 16 points.

So successful was the week-long competition, Colonel Hanbury-Williams announced on the last night of the performances that Lord Grey was making the competition an annual event.

The following year, thirteen teams competed in the second annual Lord Grey Musical and Dramatic Competition. The competition was again held at the Russell Theatre in Ottawa. Subscription tickets for the full six nights of the competition cost $5. Again, the judges were American to avoid the appearance of bias.  Although competition rules had been eased for 1908 to allow any musical or theatrical group from a town or city of any size to compete, all the competing groups came from major eastern cities. Six of the contestants came from Ottawa, with the remaining participants coming from Quebec City (2), Toronto (2) and Montreal (3).

Again, the week-long series of musical and theatrical performances were judged a great success.

Ottawa fared particularly well. On February 29, 1908, Colonel Hanbury-Williams announced that Ottawa teams had won both the musical and dramatic events. The musical trophy went to the Canadian Conservatory of Music, conducted by Donald Heins. The Quebec Symphony Orchestra, the 1907 winner, and Ottawa’s Orpheus Glee Club came in tied for second place. The Canadian Conservatory of Music’s entry was essentially a string orchestra consisting of thirty violins, violas, violincellos and basses plus a grand piano. Its classical programme included Grieg’s Elegiac Melody, Minuet by Motzart, and La Dernier Sommeil by de la Vierge.

On the theatrical side, Ottawa’s Thespian Club won the Earl Grey Trophy for its two short productions of Food and Folly, a two-act “gastronomic” farce and A Light From St. Agnes, a one-act Broadway tragedy. Although the eventual winner of the competition, the Citizen’s reviewer was not terribly impressed by the Thespians’ farce. He described the play as “impossible,” thin on humour, with dialogue that tended to drag. He had much kinder words for A Light From St. Agnes. He thought the climax of the play was “admirably acted” with both the leading man and leading woman putting on strong performances.

The Early Grey Musical and Dramatic Competition continued to be held for the next four years, moving to Montreal in 1909, Toronto in 1910, Winnipeg in 1911, and back to Ottawa in 1912.

The 1912, and ultimately the final winners of the Lord Grey Trophy, were the Ottawa Symphony Orchestra (for the fourth time) and Winnipeg’s Dramatic Society.

In late 1912, Colonel Lowther, the military secretary to HRH the Duke of Connaught who had succeeded Lord Grey as Governor General the previous year, said that the 1913 competition would be dropped for "various reasons."

It is possible that the new Governor General had other priorities, and didn’t see the point of adding to the lustre of his predecessor’s reputation. Organizing the competition must also have been a considerable challenge. Given its scale and the huge number of volunteers needed to organize and run it, the necessary logistics may have been too onerous to sustain.

Did the competition succeed in its mission in encouraging amateur music and drama? It’s difficult to say, not knowing the counterfactual. However, in 1913, just months after the cancellation of the Earl Grey Competition, the Canadian Federation of University Women launched the Ottawa Drama League (ODL), later known as the Ottawa Little Theatre.

Over time, "little theatres" were also established in other Canadian cities. The ODL presented its first production at the Russell Theatre in 1914.

In 1933, the Earl of Bessborough launched the Dominion Drama Festival in co-operation with the ODL at its Little Theatre on King Edward Avenue.

As for the Earl Grey trophies themselves, they seem to have disappeared. An Earl Grey Trophy continues to be awarded at the Winnipeg Music Festival for the best school chorus, but it only dates back to 1923, six years after Lord Grey’s death. It is likely named for the "Earl Grey School" -- the first winner of the cup-like trophy.