Remember This? The Galloping Gourmet 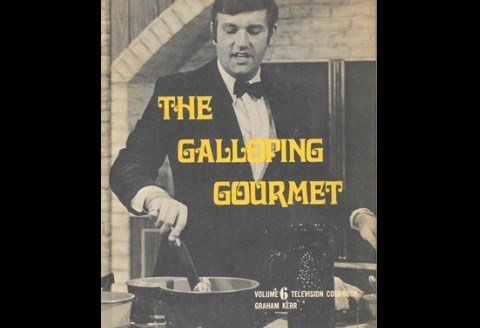 Long before Jamie Oliver or Gordon Ramsay worked their culinary magic on television, there was Graham Kerr, a.k.a. The Galloping Gourmet.

While Kerr (pronounced 'Care') was not by any means the first gourmet chef to appear on the small screen -- that honour goes to James Beard in 1946 (he, like Julia Child, did much to popularize fine cooking in North America). At a time when the acme of fine dining for many Americans and Canadians was a hamburger topped with bacon and cheese, and Italian cuisine was a can of Chef Boyardee spaghetti, Kerr introduced millions to the likes of Lamb Apollo, Red Snapper in Pernod, Crab Captain Cook, and Gateau Saint Honoré.

His zany antics, lightning fast wit and double entendres delivered while chopping and sautéing delighted television audiences around the world. At the peak of his popularity in 1970, his television show, The Galloping Gourmet, was seen in thirty-eight countries, including the United States, Canada, Britain, Germany, France and Australia, with more than 200 million viewers. Dubbed into French, it was called the Le Gourmet Farfelu on the CBC’s French-language network.

Amazingly, The Galloping Gourmet was made in Ottawa.

The British-born Kerr learnt how to cook as a teenager during the late 1940s in the kitchen of his parents’ hotel.

After five years in the British Army’s catering corps, he moved to New Zealand and joined the New Zealand Air Force as a catering adviser. It was in New Zealand in 1959 that he got his first televised cooking show -- Eggs with Flight Lieutenant Kerr. Performing in uniform, the young Kerr received a munificent $25 for his weekly television programme. Spotted by a promoter with links to Australia, Kerr was launched on Australian television with a programme called Entertaining with Kerr in 1964 on the Ten Network.

In 1968, he and his wife Treena came to Ottawa to film The Galloping Gourmet for Freemantle International, a television production/distribution company.

Although the show was aimed at an American audience, the Kerrs chose Canada as their base of operations because they wanted to bring a British/Australian flavour to the show that they thought might be lost in an American-made production.

Also, Canada had first class television studios that could make colour programs. Colour television had been introduced to the Canadian market in 1966, whereas Australian television was still operating in black and white. To make the daily 23-minute programme, the Kerrs went to the CJOH studios located at the corner of Merivale Road and Clyde Avenue in Ottawa.

Then owned by Bushnell Communications, CJOH was the third busiest television production centre in Canada. Under the direction of Bill McKee, an exceptional staff of 160 people, of whom 100 were directly in production, worked ten hour days seven days a week producing as many as dozen different television series as well as films for government departments. In a 1970 interview, Kerr stated that CJOH had the "finest" television crew with whom they had ever worked.

Production of The Galloping Gourmet began in the summer of 1968, making six shows a day, thirty shows per week. It was a gruelling schedule. The Kerrs worked as a team, Graham in front of the camera, and Treena as the show’s producer.

Initially, there was little to distinguish the new show. Indeed, the television studio’s audience relations staff found it difficult to find people willing to fill the seats in the studio equipped with a full kitchen with an autumn brown fridge and stove, dining room, bar and wine rack. However, this was to quickly change.

The program first aired on CBC television (CBOT, channel 4 in Ottawa) at 4 p.m. on Monday, December 30, 1968, up against the likes of Match Game, Big Spender, House Party, and the cartoon show Hercules.

The show was also syndicated throughout the United States. CBOT advertised it as "a cooking show -- but what a cooking show! It is as entertaining as the best comedy shows and as informative as a documentary because of the talent of the host Graham Kerr, a world famous gourmet, formerly of England, now living in Australia."  It added that Kerr was nicknamed the galloping gourmet, "because of the lightning speed at which he moves his six foot, three-inch frame while alternately singing, dancing, telling stories and giving homely advice -- all while cooking sumptuous dishes with dazzling dexterity."

It was an apt description though his nickname was more likely based on a book that he co-authored with wine expert Len Evans called The Galloping Gourmets published in 1967. The book chronicled the authors’ globetrotting efforts to find the world’s best restaurants in 35 days.

His address was also wrong. By this time, Graham, Treena and the Kerr children had taken up residence in the tony Rockcliffe Park neighbourhood in Ottawa.

The Galloping Gourmet was an instant and huge success, though some stations censored the more naughty bits. The Globe and Mail, in a rant about the poor quality of daytime television filled with Lucy Show and Gilligan’s Island re-runs, soap operas, and second-rate talk shows, likened The Galloping Gourmet to "a flower growing in a crammed wall." It opined that "while Graham gallops, there is hope."

Tickets to attend the show’s tapings became as rare as hen’s teeth.

Kerr’s most faithful admirers were female. One die-hard fan attended 49 times during the show’s first year. It helped that he was a culinary James Bond with a sense of humour -- young, good looking, always impeccably dressed, and a superb British accent.

But the show appealed to all, women and men, young and old. The reason -- it was fun.

Each show began with Kerr jumping over a chair with a glass of wine in his hand. The manoeuvre, suggested by wife Treena, became his signature move. Most shows had some gag that were sure to provoke guffaws, such as stirring a pot with a five-foot spoon called "Big Mouth," or pulling a brassiere out of a rolling pin. Shows also featured clips of exciting places around the world visited by the Kerrs for culinary inspiration. But the most endearing feature of the show was Kerr’s unbounded enthusiasm, excellent comic timing, and an ability to roll with whatever happened. To watch him try to unstick a reluctant cake out of a mould while a cherry sauce is cooking on the stove is hysterically funny.

The show was nominated for two Daytime Emmys, but lost out to The Today Show. However, Kerr received the ultimate public recognition when he was invited to appear on The Tonight Show with Johnny Carson in 1970.

But what about the food? Kerr’s culinary critics poo-pooed his skills, seeing him as a showman rather than an expert at fine cuisine. One called him the Liberace of the cooking world.

There may be an element of truth to this, but he introduced people to a range of cuisines, from Cajun jambalaya to British beer and rump pot roast, to Mexican huevos rancheros and Russian shrimp povlik.

One thing that was clear, however, his food was rich…very rich. There were few vegetables. In his recipes, Kerr used copious amounts of clarified butter, fat and sugar. Just watching him lard an already well-marbled, two-inch steak, then fry it in butter, bacon fat and brown sugar is sufficient to clog the arteries. But this was a more innocent time. Certainly, willing volunteers, usually women pulled from the audience at the end of each show to taste his culinary creations, appeared to love his food.

At the height of his popularity, disaster struck.

In April 1971, Kerr was seriously hurt when a truck rear-ended his car in California, leaving him with a damaged spine and a weakened right arm. The couple returned to Ottawa to try to tape another season, but things were not the same. With Kerr injured, shows were mostly cobbled together using bits of earlier programs with celebrities brought in to give their opinions of past shows and dishes.

In the summer of that year, the Kerrs bade Ottawa goodbye after taping 560 shows in front of 46,000 people. He lauded Ottawans for their support, coming out for tapings in the midst of snowstorms, and stoically sitting through an overheated studio when summer air conditioning failed.

From leafy Rockcliffe, the family charted a new course aboard their $300,000, 71-foot yacht with an aim to visit the world’s beauty spots while they recuperated and worked on new projects, including a Galloping Gourmet line of kitchens, cook books, and cooking utensils.

But things didn’t turn out as expected.

Treena was diagnosed with terminal lung cancer. Fortunately, the diagnosis proved to be wrong; it turned out to be tuberculosis. But she still lost part of a lung and became hooked on both prescription and non-prescription drugs. They also lost $800,000 to a man they had trusted.

The couple subsequently became born-again Christians and abjured their earlier lives. Turning his back on the galloping gourmet, Kerr gave up alcohol, which had featured prominently in his earlier shows, and his risqué behaviour. The couple visited Ottawa in 1975 to appear at an evangelical rally at the Earl Armstrong Arena in Gloucester. The same year, Kerr returned to television hosting Take Kerr, a five-minute, syndicated cooking show featuring a mix of alcohol-free recipes with a dash of Christianity.

In 1987, Treena suffered a stroke and heart attack exacerbated husband Graham was convinced by his high fat, high sugar recipes of earlier years. In response, he re-doubled his efforts to create healthy "minmax" recipes "minimum fat and cholesterol with maximum flavour and aroma." More television shows, including The Graham Kerr Show, made in Seattle, Washington, and cook books that emphasized wholesome foods followed. In 1997, Kerr returned to Canada, this time to the Bay’s Arcadian Court in Toronto to tape yet another cooking program called Graham Kerr’s Gathering Place.

Graham Kerr, who turned 85 in January 2017 lives in Mount Vernon in Skaget County, near Seattle.

Today, Kerr has come to terms with his galloping gourmet past. His latest passion is "upstreaming," that he describes as the "conversion of habits that can harm" into "resources that can heal" ourselves and the planet. Reruns of The Galloping Gourmet can be seen occasionally on late night television or on the Cooking Channel. Some have also been posted on YouTube. They are worth watching for the '60s clothes and hairstyles, and, of course, for Graham Kerr’s incomparable cooking style and humour.

Remember This? Mowat and MacGillivray -- stock market swindlers
Aug 31, 2020 11:58 AM
Comments
We welcome your feedback and encourage you to share your thoughts. We ask that you be respectful of others and their points of view, refrain from personal attacks and stay on topic. To learn about our commenting policies and how we moderate, please read our Community Guidelines.