Remember This? The 'talkies' come to Ottawa 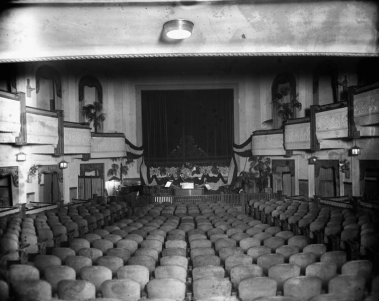 Interior of the Regent Theatre located at the north-west corner of Bank and Sparks Streets, Ottawa, 1918, Topley Studios/Library and Archives Canada, PA-028126. The Regent became the first Ottawa cinema to show a “talking” film, 26 December 1928.

Imagine the excitement, anticipation and even trepidation that came with the arrival of talking movies -- the "talkies" -- in the late 1920s.

For a generation, silent movies had ruled the cinemas of the world. Audiences delighted in the romance of Rudolph Valentino in The Sheik (1921), the swashbuckling adventures of Douglas Fairbanks in The Black Pirate (1926), and the antics of Clara Bow, the girl with "IT" (1927). Language was no obstacle; film was universal. Foreign movies, like the German-made Nosferatu (1922), the horror classic that introduced the vampire to the silver screen, and the Russian-made revolutionary thriller Battleship Potemkin (1925) gained large audiences in North America.

But for the first time, movie goers were going to be able to hear their idols speak. Yikes!

In 1928, the Ottawa Journal described the terror this engendered among the acting fraternity. All of a sudden, actors were rushing off to take elocution lessons. The newspaper opined, "To hear a Spanish beauty speaking in the accent of the East Side or a New England fisherman declaiming in the broken English of a Polish-American might be entertaining but it would not be art." Many of the great matinee idols of the silent era were not to make the transition.

The first public exhibition of a synchronized film sound track took place at the Paris Exhibition in 1900, using a system pioneered by Henri Loiret and Clément-Maurice Gratioulet, called Photo-Cinéma-Théatre. The sound was recorded on a cylinder that was played in sync with the film. But the technology was unreliable.

Three commercial variants of this technique emerged: Photofilm, PhotoPhone and Movietone. Another method of synchronizing a sound track to film involved sound on a disc that was played in synch with the film. Photokinema developed by Orlando Kellum and Vitaphone by Warner Brothers used this technique.

The Jazz Singer (1927) starring Al Jolson is usually credited with being the first feature-length talking film. It used the Vitaphone system. However, the movie was really a hybrid creation; it was a silent movie with four singing and talking scenes. Jolson apparently says a mere 354 words during the film, including the prophetic "You ain’t heard nothin’ yet!"

There was an immediate rush by cinemas across North America to buy the expensive equipment needed to play the new "talkies."

There were concerns, however. Would audiences accept this costly film innovation?

Many directors deplored the advent of sound, complaining that a focus on dialogue would detract from the aesthetic that they were trying to create.  Mary Pickford reportedly said "adding sound to film was like putting lip rouge on Venus de Milo." Her career was to flounder after talkies became established.

The word "talkie" didn’t go down well with some either.

Pedants sought expert academic advice for a new name for the invention. Suggestions included the "Audien," the "Cinelog," and the "Phonocinema," which, according to the Ottawa Citizen, would probably become the "Phocin." The last alternative would have been particularly unfortunate if pronounced with a hard 'C.'

Thankfully, none of these possibilities took.

Ottawa was one of the first cities in Canada after Toronto to start playing "talkies."

The Regent Theatre located on the north-west corner of Bank and Sparks Street, where the Bank of Canada Museum is today, debuted Fox Movietone productions on Boxing Day, December 26, 1928.

The first showing was a by-invitation-only, private event.

The program started at 11 p.m. with Fox Movietone news, featuring the signing of the Kellogg-Briand Treaty four months earlier in Paris. Signatories to the treaty, which was negotiated by Frank Kellogg, U.S. Secretary of State and Aristide Briand, the French Minister of Foreign Affairs, renounced war as a means of resolving international disputes. The Ottawa Citizen commented that one could hear the "buzz of subdued sound and then M. Briand arises to speak." In a succeeding scene, the U.S. Ambassador to France introduces Kellogg, who also says a few words of greeting. The Citizen journalist enthused that "every word, every syllable, he utters is distinctly heard." A second news story showed the Prince of Wales (the future King Edward VIII) opening a new dock in Bristol and giving a short speech, followed by an outdoor political rally in Britain with David Lloyd George, former Prime Minister and leader of the Liberal Party, speaking in the rain.

After the newsreel came a short film called "The Hut," which was set in Siberia, starring the Russian soprano, Miss Nina Tarasova, backed by the Russian Cathedral Choir. Again the Citizen’s journalist was captivated with the quality of the sound which he thought was better than hearing music on "a phonograph, radio, or telephone," and was "free of mechanical interference."

This was followed by an "all talkie," ten-minute comedy called The Family Picnic. Directed and written by Harry Delf, this Fox film starred Raymond McKee as the husband and Kathleen Key as the wife. Again, the journalist was impressed with the sound fidelity, especially the reproduction of the actors’ voices, street sounds, and even the approaching sound of a train.

The pièce de résistance of the evening was the 1928 Fox movie Street Angel, starring Janet Gaynor and Charles Farrell, directed by Frank Borzage.

The film is the story of a Neapolitan street waif with a past (Gaynor), who flees to the circus where she falls in love with a starving artist (Farrell). Although there was no dialogue, the 110-piece Roxy Theatre Grand Orchestra of New York provided the musical accompaniment. The film won Photo Magazine’s bronze medal for the best picture of 1928. Janet Gaynor won the very first Oscar for best supporting actress in 1929 for her role. The Citizen said that the movie ranked with "the best of all time."

For the excited Ottawa citizens invited to this late-night inauguration of talking films, it was worth the bleary eyes they had the next morning.

"The Canadian Capital joined movie fandom the world over in applauding this audio-scenic innovation," wrote the Ottawa Journal. Ray Tubman, the manager of the Regent Theatre, was roundly congratulated by his many friends.

After its special showing on Boxing Day, 1928, a preview opened the following night, again at 11 p.m., with the formal opening the day after that (Saturday). The huge crowds of eager spectators were urged to go to the matinee and early evening performances to help ensure that they could obtain seats. The Journal wrote, "Never in the history of the motion picture has any new development been introduced which has caused such a furore as this new marvel."

Ottawa companies wanted to be associated with the launch of talkies to the nation’s capital.

Stanley Lewis, the future mayor of Ottawa from 1936-48 and the owner of an electrical store, advertised that the Regent Theatre had entrusted the installation of the Movietone equipment to his firm -- "Enough Said" read the ad. Merchants on Sparks Street, including Orme’s, Lindsay’s, the Metropolitan Stores and John Raper Piano Co. Ltd -- the Home of the Othophonic Victrola -- advertised for sale records of the music from The Street Angel. The hit theme song Angela Mia could be purchased for 50 cents on the Domino label with The Rose You Gave To Me on the reverse side. Even the shoe company Gale & Co. got in on the action by advertising Cordovan leather shoes "as New and Distinctive as the Movietone."

The arrival of the talkies to Ottawa was a huge success, as it was everywhere in North America. Within a few scant years, the great silent film industry fell... silent.

Remember This? The Earl Grey Musical and Dramatic Trophy
Feb 3, 2020 10:05 AM
Comments
We welcome your feedback and encourage you to share your thoughts on this story. We ask that you be respectful of others and their points of view, refrain from personal attacks and stay on topic. To learn about our commenting policies and how we moderate, please read our Community Guidelines.