Kansas governor vetoes limits on her power but loosens rules 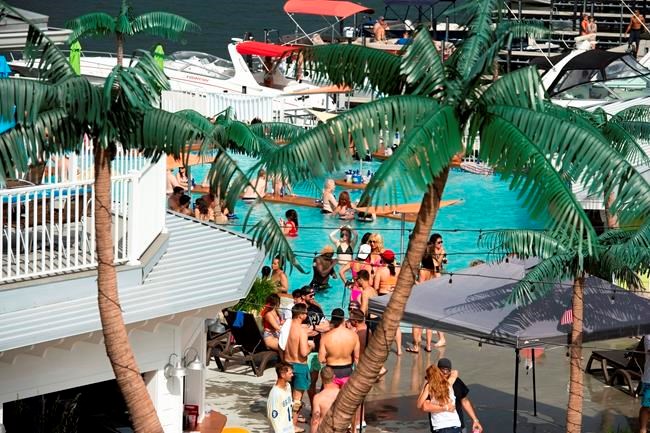 TOPEKA, Kan. — Kansas' Democratic governor on Tuesday vetoed a sweeping Republican coronavirus measure that would have limited her power to direct the state's pandemic response but then ceded to local officials the authority to keep restrictions on businesses.

Gov. Laura Kelly not only killed a bill approved by the GOP-controlled Legislature last week but also issued a new state-of- emergency declaration to replace one set to expire Tuesday night. Many Republicans question whether she has the legal authority to do that — and retain the governor's broad emergency powers — so her action is likely to keep an intense partisan dispute burning and risk a potential court challenge.

Kelly also is heightening the potential conflict with GOP leaders by calling the Legislature back into special session on June 3 to extend the new state of emergency past June 10. However, Republicans have a long list of proposals, including shielding businesses and health care providers from possible coronavirus-related lawsuits.

Lawmakers ended their 2020 session in a single, frenzied 24-hour stretch after reconvening Thursday from a coronavirus-mandated spring break that started March 20. Kelly called the process of pushing through the coronavirus bill “messy, confusing and complicated.”

“The bill is purported to address the pandemic but instead would make a mess of the state's ability to respond in times of crisis,” Kelly said during a news conference.

Kelly joined fellow Democratic governors in Michigan, Pennsylvania and Wisconsin in facing a strong backlash from Republicans over their handling of the pandemic. The others govern in swing states important to President Donald Trump’s reelection, but he won Kansas handily in 2016 and is expected to carry it again this year.

Because lawmakers are out of session, they can't challenge Kelly's veto, though the special session gives them a chance to try again to curb her power.

The bill Kelly vetoed would have required her to get the permission of legislative leaders to extend the state of emergency through June or continue closing businesses for more than 15 days.

The measure also would have given legislative leaders the final say over how the state spends $1.25 billion in federal coronavirus relief funds. They called it necessary oversight; Kelly said it would delay the money's distribution.

The bill also would have shielded businesses and medical providers from lawsuits, a priority of Republicans nationally.

Senate President Susan Wagle, a Wichita Republican and a vocal Kelly critic, declared victory because Kelly also is converting her mandate for a phased reopening of the state's economy into merely a set of recommendations for the state's 105 counties. Kelly had planned to keep some restrictions until at least June 23, and county health officers will now decide what happens.

“Essentially, what we were wanting to do was to open up business,” said Wagle, also a U.S. Senate candidate. “She spent a lot of time condemning our work, but we've won.”

Republicans believe Kelly has moved too slowly to reopen the state’s economy and has too aggressively imposed restrictions. She imposed a statewide stay-at-home order from March 30 until May 4 before announcing a phased economic reopening.

Kansas has seen its reported coronavirus cases increase by 76% since the statewide-stay-at-home order expired three weeks ago, to more than 9,200 as of Monday, the state health department said. Much of the increase has been driven by outbreaks among employees of meatpacking plans at a state prison outside Kansas City.

The state’s top health official urged Kansans who joined large gatherings at Missouri’s Lake of the Ozarks during the Memorial Day weekend to self-quarantine for 14 days to prevent spreading the coronavirus.

Social media posts showed large crowds at pools, bars and restaurants near the lake without any social distancing or masks. Kelly said it's not clear how many Kansans were there.

But she acknowledged that she turned the power to set restrictions over to county officials to persuade GOP lawmakers to extend the state of emergency she declared Tuesday.

Without a state of emergency, orders Kelly issued to deal with the pandemic would all expire, and she said Tuesday she would reissue some of them. Her orders included ones banning evictions for people who can’t pay their rent during the pandemic and prohibiting utility cutoffs.

The House's Republican leaders issued a joint statement saying Kelly's veto “do nothing but create more uncertainty and less stability for Kansas.”