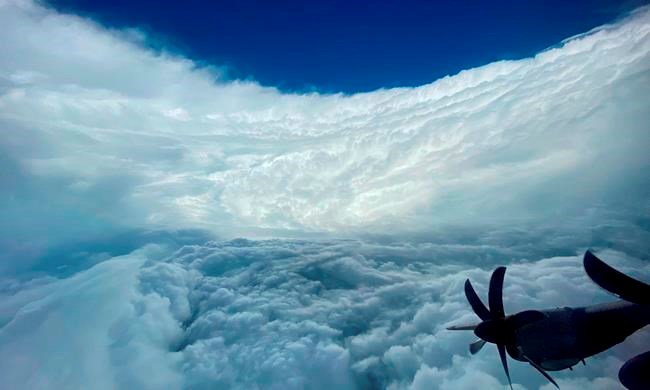 Epsilon's top sustained winds had fallen during the day to 85 mph (140 kph), dropping it from a Category 2 to a Category 1 storm, the U.S. National Hurricane Center said. The Miami-based said Epsilon was about 190 miles (300 ) east of Bermuda at 11 p.m as it moved north-northwest at 9 mph (15 kph).

Bermuda weather officials on Thursday evening discontinued a tropical storm warning. Forecasters said the storm would track over the Atlantic Ocean well east of the island in coming hours. Blustery winds were expected to subside overnight in Bermuda.

Gradual weakening of the hurricane is expected into the weekend. But large ocean swells could cause life-threatening surf and rip current conditions along the coast of New England and Atlantic Canada during the next couple of days, the hurricane warned.

Earlier in the week, Epsilon had gained 50 mph (80 kph) in wind speed in just 24 hours to become a major hurricane on Wednesday. That officially qualified it as a rapidly intensifying storm. It was the seventh storm this season to power up so quickly, reaching Category 3 status at one point.

Over the past couple decades, meteorologists have been increasingly worried about storms that blow up from nothing to a whopper, just like Epsilon. Forecasters created an official threshold for this dangerous rapid intensification — a storm gaining 35 mph (56 kph) in wind speed in just 24 hours.

This year's season has had so many storms that the hurricane has turned to the Greek alphabet after running out of official names.

Britain OKs Pfizer vaccine and will begin shots within days
Dec 2, 2020 3:04 PM
Comments
We welcome your feedback and encourage you to share your thoughts. We ask that you be respectful of others and their points of view, refrain from personal attacks and stay on topic. To learn about our commenting policies and how we moderate, please read our Community Guidelines.